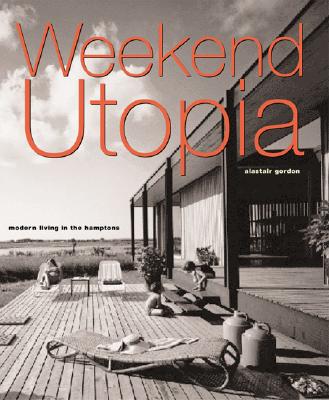 By Alastair Gordon
Email or call for price.
Hard to Find

The Hamptons, New York's fashionable summer beach resorts, are well known as weekend havens for city-dwellers who relish their idyllic setting on the Atlantic shore. Once quiet agricultural land, Eastern Long Island first became popular among artists, architects, writers, and society patrons in the 1920s, when it served as a breeding ground for modernism. From the avant-garde influence of luminaries like Jackson Pollock, Robert Motherwell, and Willem de Kooning, to the high modernism of Le Corbusier, Philip Johnson, and Richard Meier, new ideas about art, architecture, and modern living transformed the Hamptons and ultimately made it the destination of choice for those seeking respite from the battles of Wall Street and Madison Avenue. In Weekend Utopia Alastair Gordon traces this fascinating and complicated trajectory, both in architectural terms-looking at modest beach houses and modern mansions alike-and in the life stories of the world-famous artists and designers, whose influence is felt on "The Island" even today. Over 175 photographs and illustrations detail the architecture, interiors, and nuances of these beautiful weekend homes, and provide an intimate portrait of the people who inhabit them. This engrossing book combines architectural history with a broad social perspective and paints a comprehensive picture of an area that in many ways shaped modern American culture.