Protocols of the Learned Elders of Zion (Paperback) 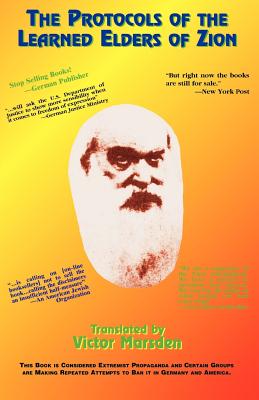 Translated from the Russian by Victor Marsden. The Protocols supposedly outlines a plan of action by elders of the Jewish Nation to rule the world -- to take control over key organizations, including assets, in order to manipulate world affairs in their favor. Some say the issue has already been settled conclusively -- that it is clearly a forgery. Although there may be final evidence to this effect, we have not seen a clear and convincing version of it produced by those making the claim. Others maintain that it was and is absolutely genuine -- proven by the fact that all copies were destroyed in Russia in the early 1900s by the Kerensky regime. In the following years, anyone caught with a copy could be, and sometimes were, shot on sight. It was law, The Protocols were taken seriously by the Russians and by people in America like the famed industrialist, Henry Ford. This seems to give it validity, but people (and nations) have been known to be fooled. If The Protocols are a forgery, they still form an interesting book which deserves to be studied in the same way "The War of the Worlds" radio broadcast duped many thousands into thinking we were being invaded by Martians in the early part of the 20th century. If, however. The Protocols are genuine (which can never be proven conclusively), it might cause some of us to keep a wary eye on world affairs. We neither support nor deny its message, we simply make it available for those who wish a copy.