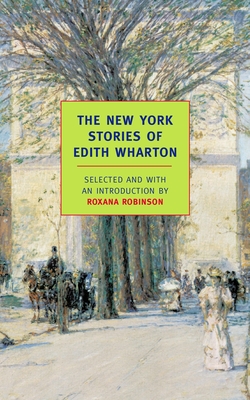 Edith Wharton wrote about New York as only a native can. Her Manhattan is a city of well-appointed drawing rooms, hansoms and broughams, all-night cotillions, and resplendent Fifth Avenue flats. Bishops’ nieces mingle with bachelor industrialists; respectable wives turn into excellent mistresses. All are governed by a code of behavior as rigid as it is precarious. What fascinates Wharton are the points of weakness in the structure of Old New York: the artists and writers at its fringes, the free-love advocates testing its limits, widows and divorcées struggling to hold their own.

The New York Stories of Edith Wharton gathers twenty stories of the city, written over the course of Wharton’s career. From her first published story, “Mrs. Manstey’s View,” to one of her last and most celebrated, “Roman Fever,” this new collection charts the growth of an American master and enriches our understanding of the central themes of her work, among them the meaning of marriage, the struggle for artistic integrity, the bonds between parent and child, and the plight of the aged.

Illuminated by Roxana Robinson’s Introduction, these stories showcase Wharton’s astonishing insight into the turbulent inner lives of the men and women caught up in a rapidly changing society.

Edith Wharton (1862—1937) published more than forty volumes of novels, short stories, verse, essays, travel books, and memoirs. She was born into a distinguished New York family and was educated privately in the United States and abroad. Among her best-known work is Ethan Frome, The House of Mirth, and The Age of Innocence, for which she was awarded the Pulitzer Prize.

Roxana Robinson is the author of the three novels Sweetwater, (2003) This Is My Daughter, (1998) and Summer Light (1988); the three short story collections A Perfect Stranger, (2005) Asking for Love, (1996) A Glimpse of Scarlet, (1991) and the biography Georgia O’Keeffe: A Life, (1989). Four of these were named Notable Books of the Year by The New York Times. She has received fellowships from the NEA, the MacDowell Colony, and the Guggenheim Foundation. Robinson's fiction has appeared in Best American Short Stories, The Atlantic, The New Yorker, Harper's and Vogue. She lives in New York City and Westchester County, New York.

"If these stories have a defining subject (other than New York) it is divorce, which begins to replace art as Wharton's excuse for discussing the fashionable and the real. In fact, one of the pleasures of a collection like this is that you can trace her tendencies in it? and the way they develop." --Time Literary Supplement

“Edith Wharton, whose deft portraits of the upper class are taken as definitive accounts of the late 19th century, remains one of the most potent names in the literature of New York.” –The New York Times (Christopher Gray)

“Wharton was Old New York…[her family] belonged to that tiny but powerful New York clan…who clung together, intermarried, set the tone and made the rules for society in Manhattan…Her New York fiction spans the years from, roughly, 1840 through the turn of the century–from before her birth, in other words, through the Civil War and beyond into the Gilded Age, an era of tremendous transformation in American society.” –The New York Times (Charles McGrath)

“Yet for all her reservations about New York, Wharton still visited and…she continued to set most of her books and stories here–in a remembered New York and what she imagined to be the New York of her parents and grandparents. The city became for her a social topography and a deep vein to be mined, both a real place and a symbolic landscape.” –The New York Times (Charles McGrath)

“Mrs. Wharton had her turf, that almost sepia New York, to be turned over and over again, like setting the plow to the family farm every spring.” –The New York Review of Books (Elizabeth Hardwick)


In both stories [“Mrs. Manstey’s View” and “Roman Fever”], and in the intervening 18 that compromise this collection, we find women observing the world from a distance, restrained by the extraordinarily elaborate codes of behaviour that govern well-to-do, turn-of-the-century New York. But also women surprising themselves, and us, with the intensity of their feelings and desires, and the ingenuity with which they’ll circumnavigate in order to express them. Where passions smoulder at length in Wharton’s novels, her stories zero in on the moments of eruption. Always, though, in the most elegantly crystalline and coolly ironic prose.
— The Independent
Spanning 40 years (1891-1934), these 20 tales of low passions and high society show off Wharton at her forensic and acerbic best. Divorce, adultery, bankruptcy: the misdeeds that undermine gentility in the brownstones of the Manhattan rich alter, but the fear and fragility behind all the charm do not. To rebels, bolters or swindlers, these plush parlours may be prisons; but, after expulsion, they glow “with the glamor of sword-barred Edens.”
— The Observer (UK)
Let’s do this the way Edith Wharton’s publicist would do it: “Steeped in Manhattan high society, Edith Wharton has a unique perspective on the lavish parties, debauched bachelors and vicious women of a certain age who prowl the penthouses of Manhattan....All true. Except since The New York Stories of Edith Wharton spans the late 19th and early 20th centuries, the indiscretions within are a lot more nuanced than in, say, Gossip Girl.
— L Magazine
...irresistible reading for anyone ever smitten with, or smited by, New York.
— Gay City News