Reign of the Anunnaki: The Alien Manipulation of Our Spiritual Destiny (Paperback) 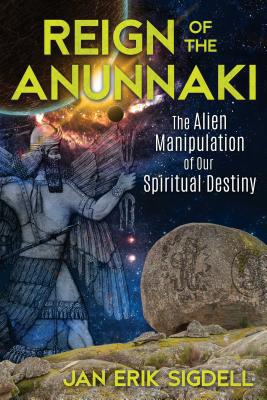 • Explores how the Anunnaki have maintained invisible surveillance over us and how they control our development through religion, secret societies, and catastrophes

• Reveals how they feed off our energies and how this ability has allowed them to remain here on Earth as multidimensional entities, enforcing their control invisibly

Cuneiform texts found on clay plates in Mesopotamia tell us about an extraterrestrial race, called the Anunnaki, who came from space to exploit our planet. Through genetic manipulation, they created modern humans from existing earthly life forms to serve them as slaves. They physically left our planet millennia ago, but as Jan Erik Sigdell reveals, their influence and control over humanity is still pervasive and significant.

Sigdell explains how the Anunnaki have maintained invisible surveillance over us as well as control over how humanity develops, setting limits on our evolution and holding back our development by means of manipulation and catastrophes, including the deluge immortalized in the Bible and many other ancient myths. He shows how they still manipulate our politics and affairs via secret societies, such as the Illuminati, and the political elite, such as the Bilderberg Group. Examining ancient descriptions of the Anunnaki as entities that resemble winged reptiles or amphibians, the author also explores their diet and how they feed off blood and the energies given off by lower life forms, such as humans, when they are expressing extreme negative emotions, having sex, or dying. This energy-feeding ability has allowed them to remain here on Earth as multidimensional entities, enforcing their control invisibly. He explains how the Anunnaki established religions as tools for control, setting up the major religions with themselves as “gods” and playing them against each other to keep humanity’s attention away from ongoing Anunnaki manipulation. They have also hidden from us the existence of the true highest creator, who created the cosmos as well as the Anunnaki themselves.

The author reveals how the highest creator sent a messenger called Jesus to expose the Anunnaki and show us a way out of their matrix of control through a spirituality based on love, empathy, and sacred sexuality. But the “god” of the Anunnaki defeated this messenger and replaced him with a false Christ. This led to the development of Paulinian Christianity under Anunnaki influence, as well as other parallel religions such as Islam, and the suppression and elimination of the original Christianity, Gnostic Christianity. With the discovery of hidden Gnostic texts and teachings at Nag Hammadi in 1945, the way is now paved for our release from the reign of the Anunnaki.

Jan Erik Sigdell has a master’s degree in electrical engineering and a doctorate in medical engineering, both from Chalmers University of Technology in Gothenburg, Sweden. From 1980 to 1997 he worked as a past-life regression therapist as well as a freelance consultant to the dialysis industry. Now retired, he lives in Slovenia.