Life, on the Line: A Chef's Story of Chasing Greatness, Facing Death, and Redefining the Way We Eat (Paperback) 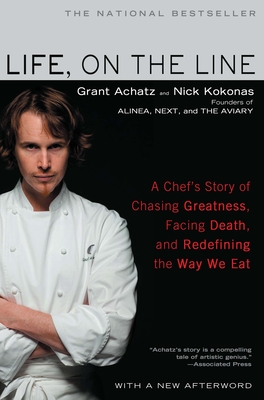 "One of America's great chefs" (Vogue), Grant Achatz, shares how his drive to cook immaculate food fueled his miraculous triumph over tongue cancer.

By 2007 chef Grant Achatz had been named one of the best new chefs in America by Food & Wine, he had received the James Beard Foundation Rising Star Chef of the Year Award, and he and Nick Kokonas had opened the conceptually radical restaurant Alinea, which was named Best Restaurant in America by Gourmet magazine. Then, positioned firmly in the world's culinary spotlight, Achatz was diagnosed with stage IV squamous cell carcinoma-tongue cancer.

The prognosis grim, Grant undertook an alternative treatment of aggressive chemotherapy and radiation that ravaged his body and left him without a sense of taste. Tapping into his profound discipline and passion, he trained his chefs to mimic his palate and learned how to cook with his other senses. As Kokonas was able to attest, the food was never better. Five months later, Grant was declared cancer-free and went on to achieve some of the highest honors in the culinary world. Life, on the Line is not only a chef's memoir, it is also a book about survival, about nurturing creativity, and about profound friendship.

"[Life, on the Line] may be the best, most inspiring chef memoir ever written." — American Way

"[Life, on the Line] is full of energy and without pretense." — Chicago Tribune

"The next great food memoir." — Details

"This must-read for the culinary crowd is the literary equivalent of caviar and Krug. Foodies will marvel at Achatz's thought process on his molecular creations, while Kokonas provides a detailed glimpse of the artistic vision and creation of modern fine dining." — Booklist

"Writing with the panache of professionals, Achatz, chef and owner of Chicago's Alinea, and his business partner, Kokonas, relate the story of Achatz's life and work in a memoir that lives up to its expansive subtitle. ...Achatz and Kokonas share an engaging, well-written, and informative description of what it's like to work in commercial kitchens along with the stirring story of Achatz's fight for his life." — Library Journal