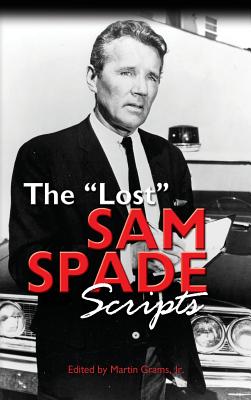 This is the HARDBACK version. When Dashiell Hammett's THE ADVENTURES OF SAM SPADE made its debut over CBS in August of 1946, the series became an instant success. Howard Duff, a virtual unknown among Hollywood circles, found himself bombarded with movie offers. The early broadcasts of the series revealed a dark side of Spade: stealing money out of a dead man's wallet to sleeping with a married woman. Over time, the script writers cut down on the dark side and added an emphasis of humor. Spade's romantic relationship with his secretary Effie was more obvious. While many recordings exist from the radio broadcasts of the forties and fifties, a large percentage of the SAM SPADE programs are considered "lost" -- due to the lack of preservation. Today, fans of the program seek out those "lost" adventures, especially the earliest broadcasts that shed light on just what kind of character Sam Spade is and the explanation for the popularity during the late forties. Thanks to Bear Manor Media and editor Martin Grams Jr., this book offers reprints of thirteen scripts from THE ADVENTURES OF SAM SPADE. Almost every script originates from a "lost" episode that fans cannot otherwise listen via recording. Some of the earliest episodes are included, revealing the darker side of Sam. A holiday offering from the Steve Dunne season is included, as well as an episode revealing Sam's affections for another woman so strong he was willing to lose his secretary for her. A lengthy essay revealing background concerning each of these scripts is included.