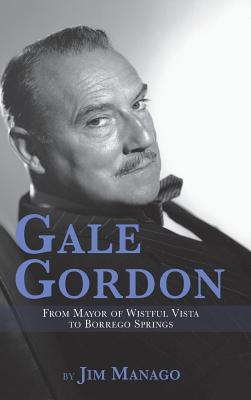 This is the HARDBACK version. Gale Gordon, one of America's favorite actors with numerous radio, television, stage, and films to his credit, possessed impeccable comic timing and a unique voice that made him one of the busiest and most productive talents of the twentieth century. Today, we remember him best as Osgood Conklin on Our Miss Brooks (1952-1956), the landlord Mr. Heckendorn on Make Room for Daddy (1959-1961), Mr. Wilson on Dennis the Menace (1962-1963), and as Theodore J. Mooney on The Lucy Show (1962-1968), Harrison Carter on Here's Lucy (1968-1974), and Curtis McGibbon on Life With Lucy (1986). Gale also skillfully played dozens of characters on Old Time Radio, such as Mayor La Trivia and Foggy Williams on Fibber McGee and Molly, and Rumson Bullard on that show's successful spinoff, The Great Gildersleeve. He was also the first actor to play the role of Flash Gordon, in the 1935 radio serial, The Amazing Interplanetary Adventures of Flash Gordon. At last, Jim Manago has brought Gale's life and career back into the spotlight with a handsomely examined biography that features a complete survey of his credits, emphasizing over twenty years of his radio work, where he developed his comedic abilities. Discover his little-known personal life, including his duties as the Honorary Mayor of Borrego Springs, California, and the desert ranch where he lived in tranquility away from the spotlight. Illustrated. Featuring transcribed excerpts from Fibber McGee and Molly and The Great Gildersleeve. "In character, Gale Gordon does something nobody else can do. He just stands there, not saying or doing anything, and all of a sudden he's the balloon that makes you want to reach for the pin."- Bob Sweeney in TV Guide ." . . Oh yes, yes, I'm one of those spoiled creatures of our modern mania. I expect comfort, serenity, beauty, privacy, modern conveniences, and of course a sound investment. And that's rather hard to achieve. But I really believe I have found the answer to all of my desires, here in this valley. I first saw it some thirty years ago. Considered myself a pioneer. Today I one of the fortunate ones lucky enough to escape the tensions of big city life and live in peace and comfort - here."-Gale Gordon speaking on A New Way of Life About the author: Jim Manago has authored The Thrills Gone By: The Kay Aldridge Story (2016), Behind Sach: The Huntz Hall Story (2015), and Love is the Reason for It All: The Shirley Booth Story (2008) for BearManor Media, and he also self-published For Bill, His Pinup Girl: The Shirley Booth & Bill Baker Story (2010).