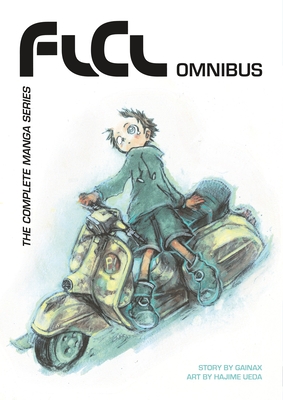 The complete FLCL manga adaptation—now with bonus color illustrations and remastered story pages! In this surreal sci-fi romp, a sullen Japanese boy finds himself in the middle of an interstellar conspiracy. As his home life unravels, a sexy space assassin becomes his family maid, and his own head becomes a portal for armed robots. Life as he knows it is quickly falling apart, and Naota doesn’t know who’s friend or foe! One thing’s for certain—he has to grow up quick and save his hometown, whether he wants to or not!

With Dark Horse’s FLCL Omnibus, fans will not only get every chapter in Hajime Ueda’s acclaimed FLCL adaptation, but this collection will also include revised story pages and over a dozen color FLCL illustrations by Ueda.

Gainax is a Japanese anime studio famous for productions such as Gunbuster, The Wings of Honneamise, Nadia: The Secret of Blue Water, Neon Genesis Evangelion, Magical Shopping Arcade Abenobashi, FLCL, Gurren Lagann, and Panty & Stocking with Garterbelt, which have gone on to critical acclaim and commercial success, Evangelion has reportedly grossed over 150 billion yen, or approximately 1.2 billion USD.

Hajime Ueda is a manga artist, animator, and illustrator, and the creator of Q-Ko-Chan: The Earth Invader Girl. He also adapted FLCL into manga and is known for his distinctive illustration style.