Henry James: Autobiographies (LOA #274): A Small Boy and Others / Notes of a Son and Brother / The Middle Years / Other Writings (Library of America Collected Nonfiction of Henry James #5) (Hardcover) 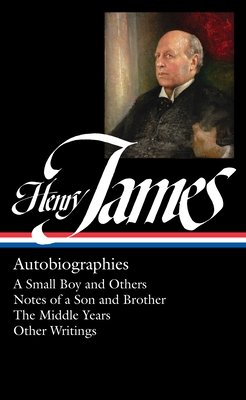 This is book number 5 in the Library of America Collected Nonfiction of Henry James series.

In 1911, deeply affected by the death of his brother William the year before, Henry James began working on a book about his early life. As was customary for James in his later years, he dictated his recollections to his secretary Theodora Bosanquet, who recalled how “a straight dive into the past brought to the surface treasure after treasure.” A Small Boy and Others (1913) and the two autobiographical books that followed—Notes of a Son and Brother (1914) and the incomplete, posthumously published The Middle Years—stand with his later novels as one of the enduring triumphs of his final years.

Not only did James create one of the singular self-portraits in American literature, he also fashioned a richly detailed account of his renowned family, especially his father, the social philosopher Henry James Sr., his brother William, and his dear cousin Minny Temple, inspiration for the heroines of two of his greatest novels, The Portrait of a Lady and The Wings of the Dove. Rounding out the volume is a selection of eight other personal reminiscences and, as an appendix, his secretary’s insightful and affectionate memoir, “Henry James at Work.”

Philip Horne, editor, is Professor of English, University College London. He is the author of Henry James: A Life in Letters (1999) and Henry James and Revision: The New York Edition (1990). Founding General Editor of Cambridge University Press’s Complete Fiction of Henry James series, he is currently working on a book on James’s relationship with Theodore Roosevelt.

"For freshness of voice, firmness of purpose (if a firmness always subject to scruples and second thoughts), and general delight on the page, the memoirs are fully alive to the contemporary reader. . . . James's memoirs have a shimmer, a charm, and an openhearted immediacy. . . . They remind us that sophistication of style and sincerity of purpose are still the best of literary brothers." —Adam Gopnik, The New Yorker