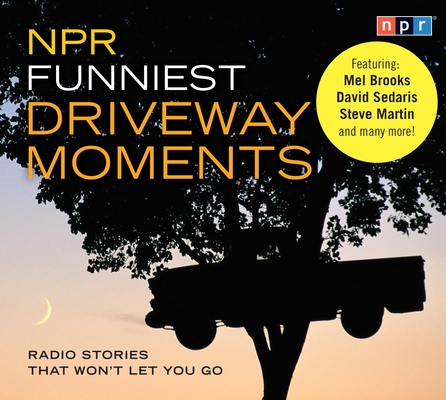 By Robert Krulwich (Performed by), NPR
Email or call for price.
Special Order

Selected from the National Public Radio archives, these stories by some of NPR's favorite commentators will keep listeners laughing.

A "driveway moment" is when you're so captivated by a story on NPR that you stay in your car to hear it to the end—even if you're sitting in your own driveway. Some are serious, some are touching, and some, like the stories included here, are very, very funny.

Literate, intelligent, and droll, each tale is worth hearing again and again, and now you don't have to stay in your car.

Host ROBERT KRULWICH is an award-winning correspondent for NPR’s Science Desk and co-hosts WNYC’s NPR-distributed scientific documentary series Radio Lab. He has been called "the most inventive network reporter in television" by TV Guide. His own humorous outlook on the news can be seen in“Backfire,” a semi-fictional year-in-review Krulwich hosts with friends Jane Curtin, Buck Henry and Tony Hendra.

“Some of the funniest moments by the funniest people—Steve Martin, Mel Brooks, Lily Tomlin, Sarah Silverman, and more—make their way into this audiobook.”
—AudioFile