How the West Really Lost God: A New Theory of Secularization (Paperback) 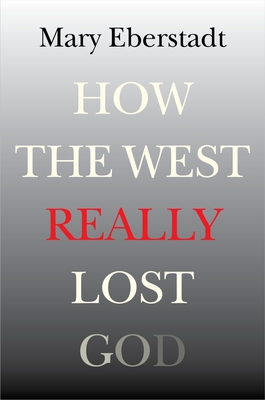 In this magisterial work, leading cultural critic Mary Eberstadt delivers a powerful new theory about the decline of religion in the Western world. The conventional wisdom is that the West first experienced religious decline, followed by the decline of the family. Eberstadt turns this standard account on its head. Marshalling an impressive array of research, from fascinating historical data on family decline in pre-Revolutionary France to contemporary popular culture both in the United States and Europe, Eberstadt shows that the reverse has also been true: the undermining of the family has further undermined Christianity itself.
Drawing on sociology, history, demography, theology, literature, and many other sources, Eberstadt shows that family decline and religious decline have gone hand in hand in the Western world in a way that has not been understood before—that they are, as she puts it in a striking new image summarizing the book’s thesis, “the double helix of society, each dependent on the strength of the other for successful reproduction.”
In sobering final chapters, Eberstadt then lays out the enormous ramifications of the mutual demise of family and faith in the West. While it is fashionable in some circles to applaud the decline both of religion and the nuclear family, there are, as Eberstadt reveals, enormous social, economic, civic, and other costs attendant on both declines. Her conclusion considers this tantalizing question: whether the economic and demographic crisis now roiling Europe and spreading to America will have the inadvertent result of reviving the family as the most viable alternative to the failed welfare state—fallout that could also lay the groundwork for a religious revival as well.
How the West Really Lost God is both a startlingly original account of how secularization happens and a sweeping brief about why everyone should care. A book written for agnostics as well as believers, atheists as well as “none of the above,” it will permanently change the way every reader understands the two institutions that have hitherto undergirded Western civilization as we know it—family and faith—and the real nature of the relationship between those two pillars of history.

Mary Eberstadt is a senior fellow at the Ethics and Public Policy Center. She has written widely for magazines and newspapers, among them First Things, Policy Review, the Weekly Standard, the Wall Street Journal, and Commentary. Her previous books include Home-Alone America, Adam and Eve after the Pill, and the satire The Loser Letters.

“An absolutely brilliant and strikingly fresh portrait of the ‘double-helix’ of faith and family, coupled with a potentially game-changing analysis of the why and how of secularization, all written with the sparkle and empathy that characterize the work of one of America’s premier social analysts." —George Weigel, Distinguished Senior Fellow, Ethics and Public Policy Center, Washington, D.C.

“You cannot understand the real philosophical problems of the West–which have been mounting for 40 years—without reading Mary Eberstadt’s new book How the West Really Lost God.”—Jonathan V. Last, author of What to Expect When No One's Expecting: America's Coming Demographic Disaster

“How the West Really Lost God” is a clear, compelling and ultimately convincing presentation of the relationship between faith and family. It’s not a call to action. But it doesn’t need to be. The Church has already told Christians what to do. The book just dispels any lingering doubts about the necessity of doing it. —Emily Stimpson, Our Sunday Visitor

“Every Christian leader who’s interested in engaging today’s culture (and who shouldn’t be?) should have this book on his or her desk. Her research and historical perspectives are fascinating, and I’m confident that she’ll give you enormous new information that will help you engage today’s non-believing culture more effectively.” —Phil Cooke, The Christian News Journal

“Mary Eberstadt’s account of the synergistic relationship between the fracturing of the family and declining religiosity is both chilling and utterly convincing. No theorist of secularization has come close to Eberstadt in sociological insight or explanatory power.”— Mary Ann Glendon, author of The Forum and the Tower: How Scholars and Politicians Have Imagined the World from Plato to Eleanor Roosevelt

“A brilliant contribution to the really big question about the future of the West, and a pleasure to read.”—Rodney Stark, author of The Rise of Christianity

"Mary Eberstadt's  account of the connection between religion and family, showing that the two institutions rise and fall together, is finely written, impressively argued and entirely persuasive. This book tells us much about the condition of Western societies today and reminds us that the atheists and the Nietzscheans owe their influence less to the truth of their views than to the loneliness to which they appeal." —Roger Scruton, author of The West and the Rest: Globalisation and the Terrorist Threat


"Mary Eberstadt is one of the most acute and creative social observers of our time. She is not afraid to challenge received wisdom and her insights are always well worth pondering."—Francis Fukuyama, author of The End of History and the Last Man


"In How the West Really Lost God, Mary Eberstadt paints a provocative and powerful portrait of the familial roots of contemporary secularization in the West. Recent declines in church attendance throughout Europe and the Americas have been driven in large part by declining rates of marriage and childbearing among their citizens. Apparently, when men and women cease to find their way to the altar and the maternity ward, they are less likely to look heavenwards. As Eberstadt notes, the decline of faith and family have gone hand in hand throughout the West. “This spells trouble for the men and women of the West, insofar as the one other institution besides family and religion that now supports them from cradle to grave is the welfare state. But, from Greece to the United States, the welfare state is running out of money. Eberstadt speculates that the demographic and financial collapse may well spur a revival of the fortunes of faith and family as people come to realize they cannot rely on the state. Only time will tell." —W. Bradford Wilcox, director of National Marriage Project, University of Virginia


"How the West Really Lost God is clear as a bell, beautifully plotted, and the point it makes not only overturns conventional wisdom but strikes far deeper into reality than any rival argument in the field." —Michael Novak, author of The Myth of Romantic Love, No One Sees God, Belief and Unbelief


"Her short, elegantly written book repeatedly shows that strong families help to keep religious practice alive, and that too many people see a causal connection running exclusively in the opposite direction."—The Economist, 4/27/2013

“A short column cannot do justice to the wide and deep reading and all the evidence Eberstadt has marshaled for her argument, so you are urged to read this book. What is certain is that this is one of those books that will forever change the conversation about why Christianity is in decline in the West.” —Crisis Magazine “In her deeply insightful new book, How the West Really Lost God, Mary Eberstadt suggests that there is a more fundamental cause underlying the cultural loss of religion—a cause that all the previous research has mistaken for just another effect. What if the decline of religion is integrally connected to, and perhaps even a result of, the decline of the natural family?”  —Washington Times