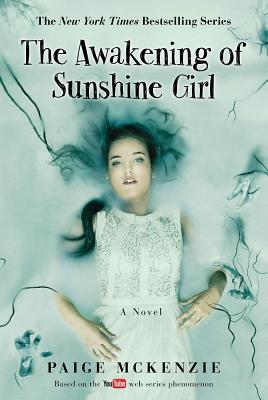 By Paige McKenzie, Alyssa Sheinmel (With)
Email or call for price

This is book number 2 in the The Haunting of Sunshine Girl Series series.

Now in paperback, the highly anticipated sequel to the New York Times bestselling The Haunting of Sunshine Girl ("A 21st century, iPhone-enabled 'Buffy the Vampire Slayer'" -- The Daily Beast), in which ghost-hunter Sunshine Griffith discovers her own paranormal abilities and a most unexpected and lethal enemy.

Sunshine Griffith has been awakened. Her powers are now fully alive and spirits follow her everywhere, desperate for help moving on to the afterlife. Hoping to get her luiseach abilities under control, she agrees to begin training with her mentor-her birth father, Aidan.

Aidan takes her to an abandoned campus deep in the Mexican jungle, far from her would-be boyfriend and protector, Nolan. But Aidan's work turns out to be more terrifying than Sunshine could have imagined. Is she prepared to finally learn the truth about what's threatening the future of the luiseach and the human race . . . and the deadly part she may play in it?

Paige McKenzie, the irresistible face of The Haunting of Sunshine Girl, began playing Sunshine as a high school junior. Today, the YouTube series boasts a viewership over 230 million views.

“Sunshine's adventure is filled with bumps in the night and shadowy figures, alluding to a larger mystery and larger world that has plenty to offer imaginative readers who grew up on Goosebumps and the like. Suspenseful, exciting and endlessly entertaining.”
— Kirkus Review

“Sunshine's story started as a YouTube series, and this creepy, suspenseful story condenses the plot of the original and offers a more polished voice than the videos. Existing fans won't be the only ones eager for more of this strong but vulnerable heroine just awakening to her potential.”
— Booklist (Grades 7–10)

“This sometimes frightening tale and series opener is based on a YouTube channel of the same name, so transmedia fans can enjoy both formats. Readers who appreciated Holly Black's Doll Bones (2013) or Cassandra Clare's City of Bones series ... should consider picking up this creepy debut.”
— Julie Zimmerman, School Library Journal

"The plot moves along smoothly and rapidly, and the writing is graceful and wonderfully polished... It's hard not to finish The Haunting of Sunshine Girl."
— Lev Grossman, Time Magazine

“When teen prodigy Paige McKenzie sets her mind to do something, she does it big time. 200,000 active YouTube subscribers on her site and over 100 million views, for instance. Not bad for a kid who still gets carded and can't vote. So when she decided to write a scary book, she nailed that one too. By the end of the first chapter I turned on all the lights in the house, even though it was noon. And it wasn't long before I'd retreated into that last-resort safe room buried deep beneath my brain's Fear Center, praying the lock would hold. No such luck. Before I knew McKenzie was out there she'd hacked the door and let all manner of frightening things slither in to get me. ... Things that go bump in the night are afraid to read this book. Things that lurk beneath the bed cry for their mothers by page ten. McKenzie's skill telling the story of a young girl who inadvertently moves into a haunted house with her clueless mother is a thing that slips up behind and puts a cold white hand right down your spine and just won't let go. The book is called The Haunting of Sunshine Girl. Read it if you dare, but don't say I didn't warn you.”
— Wes Craven, Filmmaker

"McKenzie continues to write in an authentic teen voice that sucks readers in until the end. Fans ready to graduate from R.L. Stine's Goosebumps (Scholastic) or those looking for a mix of Carolyn Keene's Nancy Drew and DC Comic's Scooby Doo will find just what they need in this paranormal series. Teens who enjoyed the previous volume or the author's YouTube channel will dive into this latest entry of ghost mischief."
— Julie Zimmerman, School Library Journal

Praise for The Haunting of Sunshine Girl:

“The Haunting of Sunshine Girl starts with mysterious ghostly laughter late one night. The laughter quickly turns to horror. It seems Sunshine Griffith has moved into a house haunted by many evil spirits. Trust me - these spirits will haunt YOU, too. I was on the edge of my seat from the very first page.”
— R.L. Stine, author of Goosebumps and Fear Street

“Enthralling! Shivers of anticipation creep up and terrifying, ancient revelations come thick and fast. Sunshine Girl is a winner for fans of teen horror!”
— Anya Allyn, author of The Dark Carousel series