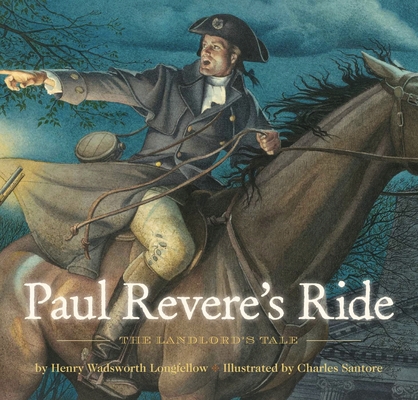 Brilliant illustrations of the first battle cry for American independence spring from the pages of Paul Revere’s Ride, illustrated by acclaimed artist Charles Santore in this newly redesigned edition of the classic tale.

Listen, my children, and you shall hear Of the midnight ride of Paul Revere So begins the classic poem of devoted patriot Paul Revere’s midnight ride on April 18, 1775. Henry Wadsworth Longfellow wrote the poem in 1860 as a tribute to the revolutionary hero who rode his horse through Medford, Lexington, and Concord to warn the American patriots that the British were coming to attack. This edition features incredible illustrations that are drawn from extensive research and careful historical consideration. From the hands of New York Times bestselling artist Charles Santore, detailed paintings show the dramatic landscape of the Charlestown shore, the Old North Church, the king’s army down to the red-coats and caps, and the streets of Boston and surrounding villages. Santore’s research enabled him to draw accurate depictions of everything from Colonial costumes and architecture to the landlord’s coat of arms and the furniture at the Wayside Inn.

Charles Santore renowned illustrations have been widely exhibited in museums and celebrated with recognitions such as the prestigious Hamilton King Award, the Society of Illustrators Award of Excellence, and the Original Art 2000 Gold Medal from the Society of Illustrators. Santore is best known for his luminous interpretations of classic children’s stories such as Snow White, The Night Before Christmas and Henry Wadsworth Longfellow’s Paul Revere’s Ride, which was named 2004 Children’s Book of the Year for Poetry by the Bank Street College Children’s Book Committee. His illustrations for The Wizard of Oz, which is widely considered to be the quintessential illustrated version, were used as the scenic backdrops for a major television performance of the work.

Elizabeth Encarnacion is an author and book editor who specializes in books for kids and teens.  Her books include Cat’s Cradle & Other Fabulous String Figures, The Girls’ Guide to Campfire Activities, 3-D Doodle Book & Kit. She is also the programming director for Spells Writing Lab, a non-profit writing and tutoring center for children based in North Philadelphia.