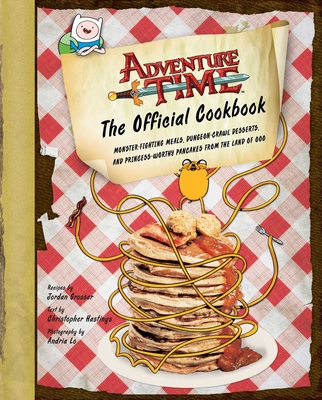 By Jordan Grosser, Christopher Hastings (Text by)
Email or call for price.
Backordered

Grab your friends and get cooking in the land of Ooo with Adventure Time: The Official Cookbook, featuring recipes from all your favorite characters and kingdoms.

In the Founders’ Island Library, Finn discovered the remains of an old cookbook filled with dishes such as “lasagna” and “boiled eggs.” And he was pretty sure that the cookbook had belonged to his mom at some point. Weird.

But a lot of the pages had been lost to the cruel sands of time. So Finn took it upon himself to fill up the book with as many crazy delicious food ideas as he could. And since that only filled around six pages, he recruited Jake, Marceline, Princess Bubblegum, and the other citizens of Ooo to help complete the cookbook. There was pouring! There was mixing! There was a pasta-related Wizard Battle!

Are you ready to feast your eyes and prepare your stomach for the most awesome, most delixious meals this side of the Candy Kingdom? Grab your friends and start cooking, Ooo-style, with Adventure Time: The Official Cookbook.

Jordan Grosser has over 13 years of experience and expertise in the culinary industry. His passion and prowess in the kitchen was evident early in his career, assuming the role of sous-chef with Ted at La Soliel of Tucson. Jordan’s career pursuits brought him to San Francisco in 2004 where he worked at Azie. After a stint at Campton Place he left to join Wolfgang Puck’s Postrio where he quickly propelled to the esteemed role of Chef De Cuisine at this San Francisco fine-dining institution. Jordan re-joined Ted as co-executive chefs at Alembic. His foray into entrepreneurial pastures have him serving as a consultant to Kimpton Restaurants, launching Flossa Cheese Company and leading Forage SF’s Wild Kitchen.

“The colorful pages, background stories, and high-quality photos of the finished recipes make this a fun cookbook to add to your collection.”

“Adventure Time: The Official Cookbook is the perfect recipe collection for fans of the series who’ve always wanted to taste Ooo cuisine but didn’t know how. The book does the hard work for fans and compiles plenty of bacon-rich, sugar-sweet concoction that cooks of any caliber can try. And, with Finn and Jake acting as your sous chefs, it is truly impossible not to have fun.”