On the Cancer Frontier: One Man, One Disease, and a Medical Revolution (Hardcover) 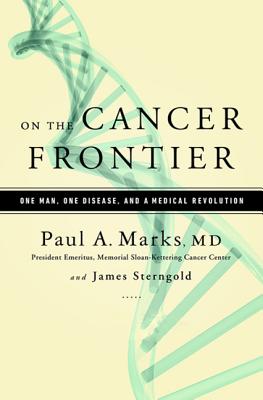 In 1950, a diagnosis of cancer was all but a death sentence. Mortality rates only got worse, and as late as 1986, an article in the New England Journal of Medicine lamented: "We are losing the war against cancer." Cancer is one of humankind's oldest and most persistent enemies; it has been called the existential disease.

But we are now entering a new, and more positive, phase in this long campaign. While cancer has not been cured -- and a cure may elude us for a long time yet -- there has been a revolution in our understanding of its nature. Years of brilliant science have revealed how this individualistic disease seizes control of the foundations of life -- our genes -- and produces guerrilla cells that can attack and elude treatments. Armed with those insights, scientists have been developing more effective weapons and producing better outcomes for patients. Paul A. Marks, MD, has been a leader in these efforts to finally control this devastating disease.

Marks helped establish the strategy for the "war on cancer" in 1971 as a researcher and member of President Nixon's cancer panel. As the president and chief executive officer for nineteen years at the world's pre-eminent cancer hospital, the Memorial Sloan-Kettering Cancer Center, he was instrumental in ending the years of futility. He also developed better therapies that promise a new era of cancer containment. Some cancers, like childhood leukemia and non-Hodgkin's lymphoma, that were once deadly conditions, are now survivable -- even curable. New steps in prevention and early diagnosis are giving patients even more hope. On the Cancer Frontier is Marks' account of the transformation in our understanding of cancer and why there is growing optimism in our ability to stop it.

“In this boldly presented argument, written with the assistance of Wall Street Journal senior business writer Sterngold, Marks passionately explains how best to pursue a course of action to control cancer's tenacity. Cancer is protean, individualistic, complex, elusive and efficient… On a level with Lewis Thomas for its clarity and verve in presenting the science of the cell and the ability of cancer to assume multiple guises.” —Kirkus starred review

“It is the story behind the science that makes this book a compelling read, even for non-boffins, who can rely on good metaphors to decipher the jargon... Dr Marks's fascinating journey through the world of cancer research.”—The Economist

“This well-written, often dramatic book about the nation's second-largest killer is a cross between memoir and cancer history book… A good addition to the growing number of engaging titles about this disease.”—Booklist