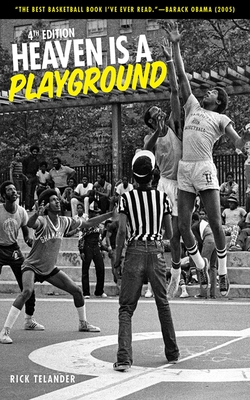 By Rick Telander
Email or call for price

Heaven Is a Playground was the first book on the uniquely American phenomenon of urban basketball. Rick Telander, a photojournalist and former high school basketball player, spent part of the summer of 1973 and all of the summer of 1974 in Brooklyn living the playground life with his subjects at Foster Park in Flatbush. He slept on the floor of a park regular’s apartment, observing, questioning, traveling, playing with, and eventually coaching a ragtag group of local teenagers whose hopes of better lives were often fanatically attached to the transcendent game itself. Telander introduces us to Fly Williams, a playground legend with incredible leaping ability and self-destructive tendencies that threatened to keep him earthbound. Another standout was Albert King, a fifteen-year-old phenom whose shy, quiet demeanor masked an otherworldly talent that eventually took him to the NBA. This edition also includes Telander’s perspectives on the arrival of an NBA team in Brooklyn. Heaven Is a Playground is one of a kind—a funny, sad, ultimately inspiring book about Americans and the roots of the sport that they love.

Rick Telander is a sports columnist for the Chicago Sun-Times and a former senior writer for Sports Illustrated and ESPN: the Magazine. Telander has won the Illinois Sportswriter of the Year Award nine times, and in 2018 he was awarded the Sigma Delta Chi Award for Journalism from the Society of Professional Journalists. He is the author of eight books, including In the Year of the Bull.