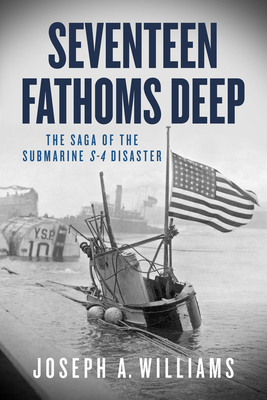 The rescue divers could hear the crew tapping out a message in Morse code: Is there any hope? After being accidentally rammed by the Coast Guard destroyer USS Paulding on December 17, 1927, the USS S-4 submarine sank to the ocean floor off Cape Cod with all forty crew aboard. Only six sailors in the forward torpedo room survived the initial accident, trapped in the compartment with the oxygen running out.

Author and naval historian Joseph A. Williams has delved into never-revealed archival sources to tell the compelling narrative of the S-4 disaster, the first attempt to rescue survivors stranded aboard a modern submarine. As navy deep sea divers struggled to save the imprisoned men, a winter storm raged at the surface, creating some of the worst diving conditions in American history. Circumstances were so terrible that one diver, Fred Michels, became trapped in the wreckage while trying to attach an air hose to the sunken sub—the rescuer now needed to be rescued. It was only through the bravery of a second diver, Thomas Eadie, that Michels was saved.

As detailed in Seventeen Fathoms Deep, lessons learned during this great tragedy moved the US Navy to improve submarine rescue technology, which resulted in later successful rescues of other downed submariners.

Joseph A. Williams is a librarian, archivist, and historian holding master's degrees in American History and Library and Information Science from Queens College. He worked for several years as the Head of the collections and Assistant Director of the State University of New York Maritime College's Stephen B. Luce Library which specializes in nautical research. Currently, he is the Deputy Director of the Greenwich Library. Joseph has published in the fields of maritime history and librarianship including articles in scholarly journals, popular sea history magazines, trade publications, and chapters in anthologies. His work has also been presented at national and regional conferences and symposia. He has taught courses at the graduate and undergraduate level in American History and Librarianship. His first book, Four Years Before the Mast, is a history of Maritime College, the nation's oldest maritime training school. His second book, Seventeen Fathoms Deep, is a narrative history concerning the 1927 submarine S-4 disaster.

“Mr. Williams has scavenged maritime history to unearth a forgotten and deeply unsettling story, a classic cautionary tale.”  —Richard Zacks, author of The Pirate Coast: Thomas Jefferson, the First Marines, and the Secret Mission of 1805


“In Seventeen Fathoms Deep, Joseph A. Williams brilliantly recounts the tale of a forgotten American tragedy. Taking readers back to the epochal year of 1927—the year of Charles Lindbergh and Babe Ruth—Williams’s vivid account of this heartbreaking submarine disaster plumbs the depths of emotion and despair. Highly recommended for readers interested in American history and maritime history, Seventeen Fathoms Deep will entertain and educate in equal measure.” —Matthew Algeo, author of The President Is a Sick Man


“Joe Williams’s gripping Seventeen Fathoms Deep fixes the 1927 loss of the submarine S-4 in its time and place and captures the desperate resolve that attended the rescue-turned-salvage. He paints full-fleshed portraits of the men at the center of the story, while making the technical and often harrowing details of hard-hat diving accessible to the layman. He also does a fine job of showing what the recovery effort meant for the careers of the people involved, and for the submarine service as a whole.” —Lincoln Paine, author of The Sea and Civilization: A Maritime History of the World


“A worthwhile purchase for fans of such recent best sellers as Erik Larson’s Dead Wake and Hampton Sides’s In the Kingdom of Ice.”  —Library Journal Xpress

“[Williams'] recreation of the S-4 disaster is absorbing, lucid and paced like a novel.” —The Day

“This book presents an engaging story […] Offers a lucid picture of the dangers involved in rescue and salvage diving and the inherent perils of submarine service.” —The Journal of America's Military Past

“[B]rings the reader into the dangers of going to sea in pig boats.” —Naval History

“[A] gripping account of an important, if forgotten, event in nautical history. Highly recommended.” —gCaptain