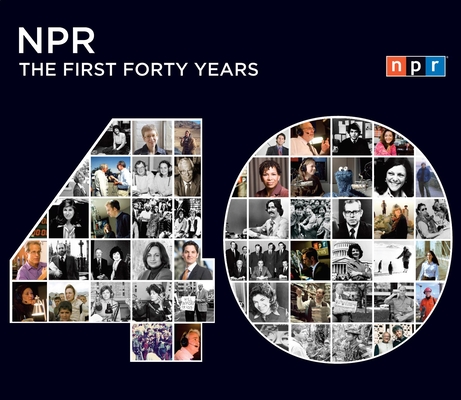 NPR was created in 1970, three years after Congress passed the Public Broadcasting Act and established the Corporation for Public Broadcasting. Signing the act into law, President Lyndon B. Johnson said, “We in America have an appetite for excellence . . . we want most of all to enrich man’s spirit.” Today NPR produces and distributes programming that reaches more than 26 million listeners weekly. More than 900 stations nationwide broadcast NPR programming.

From the turmoil of the Vietnam era to a delightful visit with the riotously funny Dame Edna Everage, join hosts Susan Stamberg (1970s), Noah Adams (1980s), Renee Montagne (1990s), and Guy Raz (2000s) for an unforgettable journey through the first forty years of NPR. This commemorative collection overflows with thought-provoking commentaries, award-winning journalism and humor from the public radio programs that have become an essential part of our lives: All Things Considered, Morning Edition, Weekend Edition, Tell Me More, Fresh Air and much more.

FEATURING: And many more.

“This is nowhere near ALL the best work produced for NPR over the last 40 years, but it reminds us of what they do best: tickle our funny bones one minute and move us to tears the next.”
—AudioFile

“A must for NPR fans and history lovers.”
—Publishers Weekly (starred review)