Something for Nothing (Paperback) 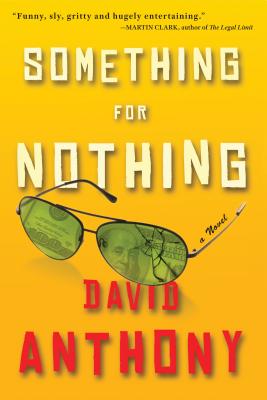 By David Anthony
Email or call for price.
Out of Print

Martin Anderson has a racehorse, a deep-sea fishing boat, a vacation home in Tahoe, and a Caddy in the garage. But his life is in freefall. It's the 1970s, and with the arrival of the oil crisis and gas rationing, his small aircraft business is tanking, as is his extravagant suburban lifestyle. Martin keeps many secrets from his wife, from his mounting debt to his penchant for sneaking into neighborhood homes and making off with small keepsakes. So when he's given the opportunity to clear his debt by using one of his planes to make a few drug runs between California and Mexico, Martin accepts the offer . . . only to find his troubles have just begun.

Smart, suspenseful, and funny, David Anthony's debut is a perfect snapshot of America's misguided pursuit of happiness—then, and now.

David Anthony grew up in the Bay Area. He is an associate professor of early American literature in the Department of English at SIU-Carbondale. This is his first novel.

“Anthony’s first novel…speeds to an adrenaline-charged climax in a conflict fueled by greed. Provocative, genre-spanning fiction by an author to watch.”—Booklist

“[A] clever and surprisingly heartfelt debut… The parallels Anthony draws between the 1974 economic crisis and our own are successful precisely because they’re not overt, just like his depiction of Martin as an antihero succeeds because his ridiculous antics are laced with a yearning to belong that’s so intense it borders on deranged innocence, rendering him the most lovable drug smuggler in ages.”—Publishers Weekly, starred review

“[Anthony’s] achievement here is his main character’s tragicomic inner life. As Martin spins out rationalizations and fantasies—he reckons himself to be on a moral par with Robin Hood or Jack the Giant Killer—readers will laugh and point fingers, but they will also see something of themselves.”—ForeWord Reviews