A Life in Men: A Novel (Paperback) 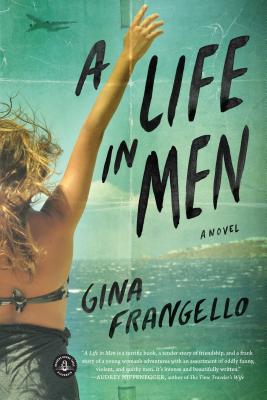 By Gina Frangello
Email or call for price.
Out of Print

The friendship between Mary and Nix had endured since childhood, a seemingly unbreakable bond, until the mid-1980s, when the two young women embarked on a summer vacation in Greece. It was a trip initiated by Nix, who had just learned that Mary had been diagnosed with a disease that would cut her life short and who was determined that it be the vacation of a lifetime. But by the time their visit to Greece was over, Nix had withdrawn from their friendship, and Mary had no idea why.

Three years later, Nix is dead, and Mary returns to Europe to try to understand what went wrong. In the process she meets the first of many men that she will spend time with as she travels throughout the world. Through them she experiences not only a sexual awakening but a spiritual and emotional awakening that allows her to understand how the past and the future are connected and to appreciate the freedom to live life adventurously.

Gina Frangello is a cofounder of Other Voices Books and the editor of the fiction section at The Nervous Breakdown. She is also the author of one previous novel and a collection of short stories. She lives in Chicago. Her website is www.ginafrangello.com.

“A Life in Men is a terrific book, a tender story of friendship, and a frank story of a young woman's adventures with an assortment of oddly funny, violent, and quirky men. It's intense and beautifully written.” —Audrey Niffenegger, author of The Time Traveler's Wife

“Original and fearless . . . A powerful portrait of human connection and individual triumph.” —People, 3.5 stars out of 4

“A beautifully written, fiercely intelligent, and psychologically nuanced portrayal of a friendship cut tragically short, the delicate balance of fate and choice, and the many varieties of love and family that create meaning . . . A Life in Men is a sort of joyous call to action. It will make you look more carefully at the time you have left.” —The Oregonian

“Frangello’s powerful novel is ambitious, relentless, and entirely unsentimental . . . A work of art.” —The Boston Globe

“Frangello writes with a clarity into the human condition that allows her to lay bare the countless ways our lives are connected, between us and other people, but more importantly between ourselves and who we were and who we’re becoming . . . The book’s heartbreaking conclusion will leave you feeling you’ve been on the journey with these characters, and all the better for it.” —The Kansas City Star

“Frangello writes with epic ferocity. She inhabits many countries brilliantly, many characters seamlessly, and a carousel of points of view . . . It takes courage to write a book like this.” —Chicago Tribune, Printers Row

“A joyful, ambitious novel that is also an adventure traversing three continents, a meditation on love, sex, and, most important, friendship, which can overcome time, distance, and even death.” —Bonnie Jo Campbell, author of Once Upon a River

“A stunning novel--Frangello’s broken characters live in a world of terror and redemption, of magnificent sadness and beauty.” —Kirkus Reviews