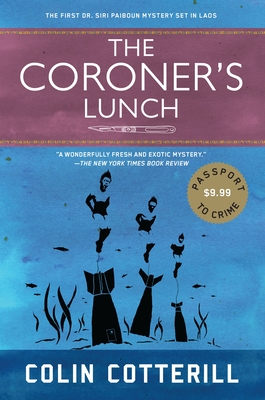 This is book number 1 in the A Dr. Siri Paiboun Mystery series.

“Set in Laos in 1975, The Coroner's Lunch introduces a terrific new sleuth, Dr. Siri Paiboun, a 72-year-old Paris-trained doctor, the new national coroner. He knows nothing about forensic medicine but he does know about truth and corruption in high places. This enthralling book is a keeper, with a fascinating setting and an absolutely lovable and intriguing sleuth.”
— Pat Kehde, The Raven Bookstore, Lawrence, KS

Laos, 1978: Dr. Siri Paiboun, a 72-year-old medical doctor, has unwillingly been appointed the national coroner of the new socialist Laos. His lab is underfunded, his boss is incompetent, and his support staff is quirky, to say the least. But Siri’s sense of humor gets him through his often frustrating days. When the body of the wife of a prominent politician comes through his morgue, Siri has reason to suspect the woman has been murdered. To get to the truth, Siri and his team face government secrets, spying neighbors, victim hauntings, Hmong shamans, botched romances, and other deadly dangers. Somehow, Siri must figure out a way to balance the will of the party and the will of the dead.

Colin Cotterill is the Dilys Award–winning author of nine other books in the Dr. Siri Paiboun series: Thirty-Three Teeth, Disco for the Departed, Anarchy and Old Dogs, Curse of the Pogo Stick, The Merry Misogynist, Love Songs from a Shallow Grave, Slash and Burn, and The Woman Who Wouldn’t Die, and Six and a Half Deadly Sins. He lives in Chumphon, Thailand, with his wife and five deranged dogs.

Praise for The Coroner's Lunch

“A wonderfully fresh and exotic mystery . . . If Cotterill . . . had done nothing more than treat us to Siri’s views on the dramatic, even comic crises that mark periods of government upheaval, his debut mystery would still be fascinating. But the multiple cases spread out on Siri’s examining table . . . are not cozy entertainments, but substantial crimes that take us into the thick of political intrigue.”
—The New York Times Book Review

“The sights, smells, and colors of Laos practically jump of the pages of this inspired, often wryly witty first novel.”
—The Denver Post

“The Soho Press crime series . . . has done mystery connoisseurs everywhere a favor by adding Colin Cotterill to its publishing list. The author gives us exotic locations; a world that few of us know well; crisp, intelligent, and often-witty writing; and, most of all, a hero unlike any other.”
—The Philadelphia Inquirer

“This series kickoff is an embarrassment of riches: Holmesian sleuthing, political satire, and [a] droll comic study of a prickly late bloomer.”
—Kirkus Reviews, Starred Review

“In Siri, Cotterill has created a detective as distinctive as Maigret or Poirot.”
—Orlando Sentinel

“This debut mystery, with its convincing and highly interesting portrayal of an exotic locale, marks the author as someone to watch.”
—Publishers Weekly