The Peculiar Night of the Blue Heart (Hardcover) 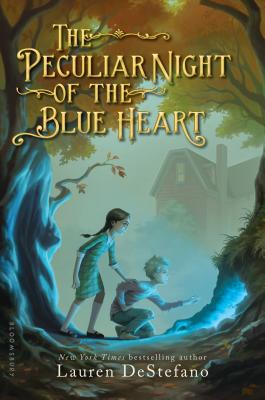 From New York Times bestselling author Lauren DeStefano comes a gorgeous tale of friendship found and fought for against a haunting danger. It's just right for fans of Serafina and the Black Cloak.

Lionel is a wild boy, who doesn't much like to be around other people. He'd rather be a purring cat or a wolf stalking the woods.

Marybeth is a nice girl. She doesn't need to be told to comb her hair or brush her teeth, and she's kind to everyone at the orphanage . . . Lionel most of all.

Different though they are, Lionel and Marybeth are best friends in a world that has forgotten about them. So when a mysterious blue spirit possesses Marybeth-and starts to take control-they know they must stop it before the real Marybeth fades away forever.

Lauren DeStefano is the New York Times and USA Today bestselling author of A Curious Tale of the In-Between, The Internment Chronicles, and The Chemical Garden trilogy, which includes Wither, Fever, and Sever. She earned her BA in English with a concentration in creative writing from Albertus Magnus College in Connecticut.
LaurenDeStefano.com
@LaurenDeStefano
laurendestefano.tumblr.com

"The plot, replete with buried bones, a terrible house of punishment for "problem" children, and more, will keep kids reading all night long (albeit with the lights on). DeStefano is no stranger to atmospheric middle-grade books, and is impressively amassing work that rivals that of older authors known for scary mysteries, such as Mary Downing Hahn and Zilpha Keatley Snyder." - starred review, Booklist

"Themes of belonging, loss, and what it means to be human underscore the tight storytelling and add depth. Touching and creepy." - School Library Journal

"A moving story about the lengths children will go to help a friend. . . DeStefano again explores the spirit world in an engaging and sometimes frightening way." - Publishers Weekly

"The idea that things that can be okay even if they’re not perfect is carefully and deeply explored, giving readers a chance to ponder this important concept. . . . Offer this to readers who appreciate ghost stories with plenty of character development." - BCCB

"Anyone who’s ever wanted to unravel a family mystery with the help of two friends—one living and one dead—will be charmed by this tale and its plucky heroine, Pram." - Kate Klise, author of DYING TO MEET YOU on A CURIOUS TALE OF THE IN-BETWEEN

"The lovable characters, the mystery of the ghost, and the deep friendship between the two children will lead middle graders back to the author's A Curious Tale of the In-between (2015) and have them counting the days until her next book." - Kirkus Reviews

"The perfect book to hand to readers looking for the mysterious and spooky." - Booklist on A CURIOUS TALE OF THE IN-BETWEEN

"Readers will be hooked from the first line of this lyrical and suspenseful mystery/fantasy (part thriller too). . . . a moving and multilayered tale. . . . Love, loss, and hope are at the heart of this exciting read." - Kirkus Reviews on A CURIOUS TALE OF THE IN-BETWEEN

"DeStefano creates a beguiling world through haunting images and descriptions. . . . An eerie, moving story." - Publishers Weekly on A CURIOUS TALE OF THE IN-BETWEEN

"Dark but often funny. . . . Fans of Holly Black’s Doll Bones may well enjoy this creepy, character-based tale." - The Horn Book on A CURIOUS TALE OF THE IN-BETWEEN

"DeStefano’s vivid prose is both evocative and immersive. . . . Thematically haunting and skillfully executed." - BCCB on A CURIOUS TALE OF THE IN-BETWEEN

"I dare you not to fall in love with Pram, a young heroine who is as gutsy as she is compassionate. Lauren DeStefano has created a touching and unforgettable glimpse into the world of the spirits." - Ellen Potter, author of the Olivia Kidney series and THE HUMMING ROOM on A CURIOUS TALE OF THE IN-BETWEEN