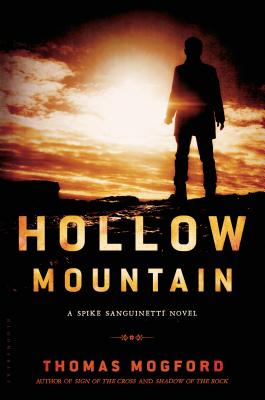 Danger has followed the lawyer Spike Sanguinetti back to Gibraltar.

The disturbing question of what happened to Spike's girlfriend, Zahra, is still unanswered. He hasn't heard from her since she vanished in Malta months ago, when suddenly his phone rings. It's Zahra, but she sounds strange. She tells him that he has to stop looking for her and that if he doesn't, Žigon will come after those closest to him. Then she hangs up.

When Peter Galliano, Spike's partner in the law firm, is hospitalized by a mysterious hit-and-run accident, and a woman asks him to investigate the suspected suicide of her husband, Spike finds himself on a perilous path that draws him into international politics and leads him, finally, to the hollow mountain.

Thomas Mogford studied modern languages at Oxford University and holds a postgraduate diploma in law from City University, London. He works for ITV Sport as a translator and reporter. Shadow of the Rock, the first book in the series, was published in 2012. An early work featuring Spike Sanguinetti reached the semifinals of the 2008 Amazon Breakthrough Novel Award and was referred to by Publishers Weekly as “an exotic, addictive mystery.” Mogford is married and lives with his family in London.
@ThomasMogford
www.thomasmogford.com

“International-crime-fiction fans looking for a new setting will find exactly what they seek in this engaging tale starring a melancholy lawyer in Gibraltar. Put this series on your radar.” —Booklist, on Shadow of the Rock

“Spike is forced into a world of intrigue where much more than his client's guilt or innocence is at stake, and he must quickly learn how to survive while surrounded by desert sharks in Mogford's very promising debut.” —Alfred Hitchcock's Mystery Magazine, on Shadow of the Rock

“[A] hard-hitting, no-holds-barred novel that will leave readers panting for the next installment.” —Kirkus Reviews, on Sign of the Cross

“Spike Sanguinetti is a younger, sexier, unmarried but still sensitive version of Donna Leon's Guido Brunetti, and his adventures may eventually attract a Leonsize audience.” —Booklist, on Sign of the Cross

“Mogford's superbly plotted thriller is just as riveting as his debut. Hang on for twists, layers of deception, and unexpected betrayals.” —Library Journal (starred review), on Sign of the Cross