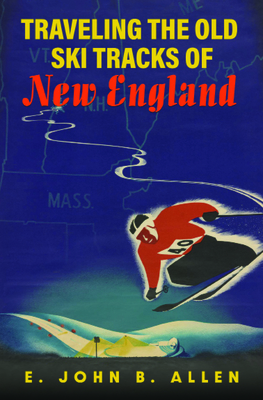 As part of an avid skiing family, I was captivated by the history of my favorite New England ski areas. I especially loved the chapter on Hannes Schneider, the Skimeister. Inspired by the history, I’m also going to check out some places we haven’t skied. Read this one by a fire, apres ski!

For over a century New Englanders have taken to the slopes in search of ways to enjoy the coldest months, and skiing has deep roots in the region. In the late nineteenth century Scandinavian immigrants worked to educate snowbound locals on how to ski, make equipment, and prepare trails. Soon thereafter, colleges across the Northeast built world-class ski programs, massive jumps were constructed in Brattleboro and Berlin, and dozens of ski areas—big and small—cropped up from the 1930s through the 1960s.

Traveling the Old Ski Tracks of New England offers a fascinating history of downhill, cross-country, and backcountry skiing across the region and its leading personalities. Moving from popular destinations like Stowe, Cannon, Bromley, and Mount Washington to the less intimidating hills surrounding Boston, Rhode Island, and Connecticut, E. John B. Allen also recovers the forgotten stories of ski areas that have been abandoned in the face of changing tastes and a warming climate.

E. JOHN B. ALLEN is professor emeritus of history at Plymouth State University and author of The Culture and Sport of Skiing: From Antiquity to World War II.

“There’s such a depth of information in these pages that manages to keep skiers connected to their past. Allen delivers context to the historical factors and people that are found on trail maps across the region. There is a satisfaction in understanding what helped build the slopes we ski today.”—Eric Wilbur, coauthor of Thirty Years in a White Haze: Dan Egan’s Story of Worldwide Adventure and the Evolution of Extreme Skiing

“The stories Allen tells cover a lot of early ski history that is not well known to the skiing public today. With different chapters covering different regions, this book will appeal to a wide readership.”—Jeremy K. Davis, author of Lost Ski Areas of the Berkshires and founder of the New England Lost Ski Areas Project