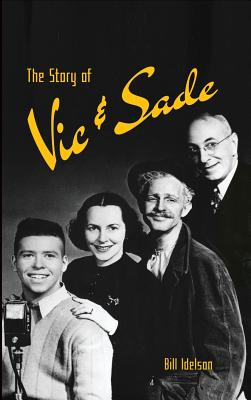 Paul Rhymer's creation of VIC AND SADE began on radio in 1932 as a two-character play featuring Art Van Harvey and Bernadine Flynn. Bill Idelson was eventually added to the cast, as nine-year-old Rush, and Idelson is the man behind this fascinating book that tells the story of one of radio's most relished programs. Over 1,800 scripts are housed at the University of Wisconsin and thanks to Idelson, we now get an idea of the early "lost" episodes. For old-time radio fans who claim this series was a pre-curser to the SEINFELD TV series (the radio show made fun of nothing), and are forced to enjoy the very few episodes known to exist in recorded form, Idelson has opened the door for you.

"The gold of this book, acknowledged by Idelson, are the complete and excerpted scripts from the mid-1930s episodes of "Vic & Sade," which illustrate the gamut of Rhymer's humor, from trenchant satire to human comedy, all with an uncanny familiarity with the bizarre side of day-to-day familial and small-town politics."
- Brent R. Swanson, Crooper, Illinois

"Idelson provides background information on Art Van Harvey (whom he calls Van) and Bernadine Flynn (Bern) but especially for Paul Rhymer. The most surprising thing about this book is what Paul Rhymer was really like. One has a certain image of what a man who writes about a small Midwestern town might be like. Paul Phymer is not that man... If you're a man of radio drama, you'll like this book. If you're a VIC AND SADE fan, you'll love this book. I definitely recommend it."
- Barbara J. Watkins, Sperdvac's Radiogram, January 2007 issue

"One of the few books I have ever written that was an amusing read. I try not to judge books by their cover, but in this case, I did. Thankfully, the book is worth the read and recommended."
- Martin Grams Jr., author 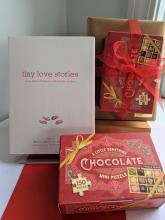 Valentine's Day done right means love stories & chocolate Show your loved ones that you love them. This Box of Chocolates mini puzzle can't be...