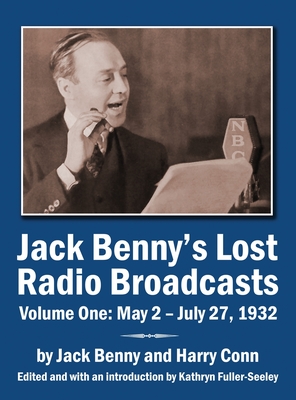 This is the hardback version.

For the first time in almost 90 years, we can experience the origins of Jack Benny's radio comedy genius. Jack Benny's Lost Radio Broadcasts, brought up from Benny's subterranean vault or the UCLA archives, almost as difficult to access ] finally share scripts of his earliest live radio programs--for which no recordings exist.

See how the soon-to-be-king of radio comedy moved from his vaudeville stand-up comedy background to invent the workplace situation comedy.

In these first shows of 1932, Jack plays a "Broadway Romeo," a genial, self-deprecating comedian, who is not yet the famously cheap "fall guy" he would become over the next two years. Jack claims that it's his bandleader, George Olsen, who's the tightwad.

Highlights of Volume One include:
- Jack's commercials for Canada Dry Ginger Ale- the funniest, and most controversial, advertising parodies he would ever perform.
- Jack's panic as he realizes he has used up every vaudeville routine he'd ever performed on stage, and this is a twice-a-week program.
- The initial Introduction of Mary Livingstone, the radio fan from Plainfield, New Jersey.
- An introduction by Kathy Fuller-Seeley that sets the stage for why these historic shows are so important to understand Benny's career.