Philly Special: The Inside Story of How the Philadelphia Eagles Won Their First Super Bowl Championship (Hardcover) 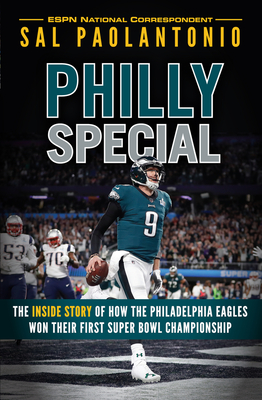 Sal Paolantonio of ESPN takes readers inside the improbable 2017 championship season of the Philadelphia Eagles—from training camp to the first Super Bowl title in franchise history. This is the inside story you will get nowhere else—from the team’s storybook start to the nail-biting victory over the New England Patriots in Minneapolis, featuring the “Philly Special,” perhaps the most memorable play in Super Bowl history.

Through exclusive interviews, readers will learn how the Eagles overcame Carson Wentz’s season-ending injury, how the team defied the odds and the critics and how they beat the greatest dynasty in modern pro football. With exclusive inside access, Paolantonio reveals a rare look into the dynamic between head coach Doug Pederson, back-up quarterback and eventual Super Bowl LII MVP Nick Foles, and the many individuals who stepped up and answered the call at the right times.

Paolantonio captures the mood of the team week by week, every step of the way, profiling numerous key players, coaches, and much, much more.

SAL PAOLANTONIO is an Emmy-award winning national correspondent for ESPN, covering the NFL for SportsCenter and Sunday NFL Countdown. He is the host of The NFL Matchup Show. He is a former sportswriter and political correspondent for the Philadelphia Inquirer and served as a surface warfare officer in the U.S. Navy.