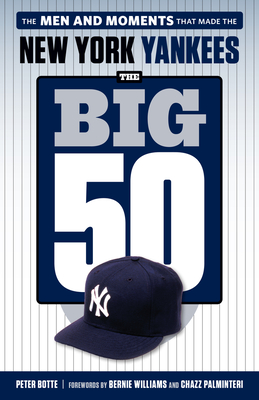 Longtime columnist Peter Botte recounts the living history of the team, counting down from No. 50 to No. 1. Learn about and revisit the remarkable stories, featuring greats like Babe Ruth, Mickey Mantle, Lou Gehrig, Derek Jeter, and Aaron Judge.

Peter Botte has been writing about New York sports for over 30 years and has covered the Yankees, Knicks, and Islanders as a beat reporter for the New York Daily News. His work has also appeared for the New York Post, SportsNet New York, and Newsday, among others.
Bernie Williams is a five-time All-Star, Williams played for the Yankees from 1991 to 2006. He resides in New York, New York.

Palminteri starred in A Bronx Tale, Bullets over Broadway, and The Usual Suspects. He resides in Westchester County, New York.