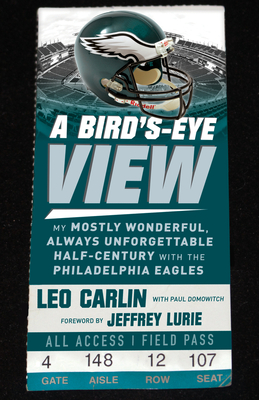 Day in, day out, Leo Carlin was a constant presence with the Philadelphia Eagles for over five decades. The longtime ticket director and front office mainstay has dedicated most of his life to creating memorable experiences for Eagles fans. He's played countless roles and has countless stories to tell as a result. A Bird's-Eye View is a fascinating, frank, in-the-room look at nearly 60 years of Eagles’ history, spanning five different ownerships, 14 head coaches, so many stars, and, of course, a Super Bowl. From getting his start as a part-timer in 1960—when professional football in Philadelphia ranked a distant third in popularity to baseball and college football—to riding down Broad Street with his fellow Eagles hall of famers in the championship parade, Carlin opens up about the highlights, lowlights, and neverending hijinks that come with the territory.

Leo Carlin worked for the Philadelphia Eagles for 55 years, serving as longtime ticket director and business manager. He was inducted into the Eagles hall of fame in 2012. Paul Domowitch has covered pro football for the Philadelphia Inquirer for over 35 years.
Rich Gannon played quarterback for 18 seasons in the National Football League. He is currently a sports commentator with CBS Sports. Gannon was born in Philadelphia and played college football at the University of Delaware.