The Captain & Me: On and Off the Field with Thurman Munson (Hardcover) 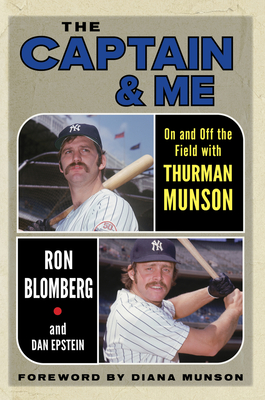 The deeply personal story of a friendship between two teammates, and of a human bond which ultimately transcends the game itself.

As back-to-back No. 1 draft picks for the New York Yankees, Ron Blomberg and Thurman Munson made for an odd couple. One was a good-looking, gregarious kid from Atlanta who cheerfully talked anyone’s ear off at the slightest provocation; the other was a dumpy, grumpy dude from the Midwest rust belt who was about as fond of making idle chit-chat as he was of shaving.

Despite the surface differences, the two men would form a close attachment as they ignited a youth movement with the 1970s Yankees. Now, over 40 years after Munson's shocking death in a plane crash at age 32, Blomberg opens up to author Dan Epstein about the beloved Yankees captain in an extraordinary memoir that reaches far beyond baseball.

By turns hilarious and heartbreaking, The Captain & Me shares tales of clubhouse hijinks during the infamous Bronx Zoo era, adventures on the road, and even rubbing shoulders with mobsters. Blomberg also offers a fascinating glimpse into baseball history, including the first-ever strike and lockout, the escalation of the Yankees–Red Sox rivalry, and the start of full-scale free agency.

This illuminating remembrance of Munson is filled with untold stories about his analytical-yet-hard-nosed approach to baseball, as well as his kindness and generosity off the field.

Ron Blomberg spent eight seasons in the majors with the New York Yankees and the Chicago White Sox, and was twice voted “Most Popular Person in New York” during his playing days with the Yankees. He earned a place in Cooperstown, thanks to becoming the first designated hitter to make a plate appearance in an official MLB game (he walked with the bases loaded), and he was inducted into the National Jewish Sports Hall of Fame in 2004. He is the author of Designated Hebrew: The Ron Blomberg Story. Dan Epstein is the author of the 1970s baseball histories Big Hair and Plastic Grass: Baseball and America in the Swinging ‘70s and Stars and Strikes: Baseball and America in the Bicentennial Summer of 1976. He writes about baseball, music and pop culture for a variety of outlets, including Rolling Stone, Revolver and the Jewish Daily Forward. He lives in Greensboro, North Carolina. Diana Munson was the wife of Yankee great Thurman Munson.