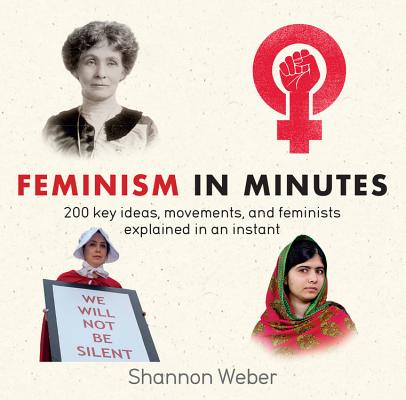 By Shannon Weber
Email or call for price.
Out of Print

WHAT DOES FEMINISM REALLY ENTAIL?
200 KEY IDEAS, MOVEMENTS, AND FEMINISTS, EXPLAINED IN AN INSTANT
Having an understanding of feminism is more important now than ever. But what really is feminism--in all its forms? Who were the key feminists, and what are their beliefs? What do feminists think about abortion, sex, religion, pornography, and beauty? And have women achieved equality--or is there still much to do?
Feminism in Minutes is the quickest, easiest way to understand the big ideas and history of feminism, from its ancient roots to the #MeToo movement today.
Contents include: Basic Concepts; Schools of Feminism; Marriage and Motherhood; Sex, Power, and Sexuality; Activism and Justice; Gender, Religion, War; Women's Achievements in Science and Medicine; Feminism in the Arts; as well as the ideas of essential feminists such as Simone de Beauvoir, Emmeline Pankhurst, Sojourner Truth, Germaine Greer, Betty Friedan, Gloria Steinem, Pussy Riot, and Malala Yousafzai, among many others.

Shannon Weber holds a PhD in Feminist Studies from the University of California. She has held positions as a gender studies professor at Tufts University, Brandeis University, Northeastern University, and Wellesley College, and has been published in peer-reviewed academic journals. Shannon is also a writer for The Body Is Not An Apology and Bitch Media.