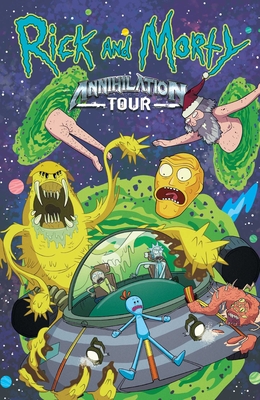 An all-new collection featuring four of Rick and Morty's greatest hits! Thrill to the rise and fall of the Flesh Curtains; witness a revolution against Rick; experience the pure sci-fi horror of "Morty Shines"; and in the finale, and an alien invasion that threatens all of reality!

Zac Gorman is a cartoonist from Detroit, MI, raised on the sacred suburban triumvirate of video games, cartoons, and comic books. He's the creator of the popular webcomic Magical Game TIme and has worked on several animated television series as a storyboard artist and character designer. Zach currently resides in Chicago with his far more talented wife and a furry little monster who most people mistake for a cat.

CJ Cannon is a self-taught artist living in Nashville, Tennessee. When they're not working on comics, outside riding their bike, or drumming, they're almost always in the house drawing fanart.

Marc Ellerby is a comics illustrator living in Essex, UK. He has worked on such titles as Rick and Morty, Doctor Who, Regular Show and The Amazing World of Gumball. His own comics (which you should totally check out!) are Chloe Noonan: Monster Hunter and Ellerbisms. You can read some comics if you like at marcellerby.com.

Katy Farina is a comic artist and illustrator based in Los Angeles, CA. She's currently a background painter at Dreamworks TV. In the past, she's done work with Boom! Studios, Oni Press, and Z2 Publishing. In the rare instance she isn't working on comics, she moonlights as the Baba Yaga; enticing local youth into ethical dilemmas and scooting around in her chicken-legged hut.