Rising From the Deep: The Seattle Kraken, a Tenacious Push for Expansion, and the Emerald City's Sports Revival (Hardcover) 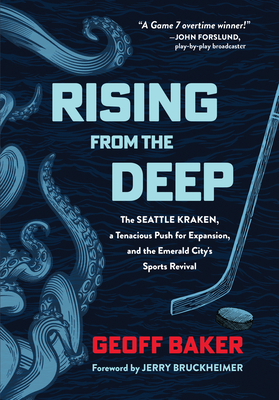 Encompassing sports, civics, and regional identity, this is a multifaceted narrative of launching a franchise from the ground up.

In 2021, Seattle released the Kraken.

Evoking the aquatic mystique of Puget Sound while epitomizing colorful innovation, the Seattle Kraken, the National Hockey League's newest expansion franchise, entered its inaugural season backed by league-wide fanfare and with an eye toward the future of both the team and its city.

In true Seattle fashion, they would play their games on ice from recycled rainwater in front of sold-out crowds at the privately funded, all-electric, Amazon-sponsored Climate Pledge Arena. If an organic union of sports and civic identity was ever possible, this would seem to be it.

How did it go so right? What made the Emerald City the perfect setting for a new hockey franchise just years after it had failed to retain the NBA's SuperSonics? And could the same forces that propelled the Kraken into existence be redeployed to attract a basketball team once again?

Rising From the Deep traces the dynamic origins of the NHL's newest team, from the history of Seattle hockey in the early 20th century, to the winter sports void left by the bitter departure of the Sonics, to the the development of a team identity that captured the imagination of hockey fans everywhere.

Seattle Times investigative reporter Geoff Baker takes readers behind the scenes and back to the start with power brokers, players, and fans in this fascinating, hard-fought saga.

Geoff Baker covers Seattle Kraken hockey and is a sports enterprise and investigative reporter for The Seattle Times. Previously he has written for the Montreal Gazette and Toronto Star. Born and raised in Quebec, Baker has won Canada's National Newspaper Award three times and has won two Associated Press Sports Editors (APSE) awards.