Death of the Senate: My Front Row Seat to the Demise of the World's Greatest Deliberative Body (Hardcover) 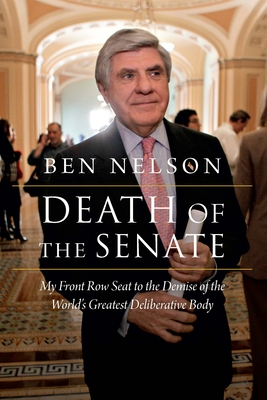 Something is rotten in the U.S. Senate, and the disease has been spreading for some time. But Ben Nelson, former U.S. senator from Nebraska, is not going to let the institution destroy itself without a fight. Death of the Senate is a clear-eyed look inside the Senate chamber and a brutally honest account of the current political reality.

In his two terms as a Democratic senator from the red state of Nebraska, Nelson positioned himself as a moderate broker between his more liberal and conservative colleagues and became a frontline player in the most consequential fights of the Bush and Obama years. His trusted centrist position gave him a unique perch from which to participate in some of the last great rounds of bipartisan cooperation, such as the “Gang of 14” that considered nominees for the federal bench—and passed over a young lawyer named Brett Kavanaugh for being too partisan.

Nelson learned early on that the key to any negotiation at any level is genuine trust. With humor, insight, and firsthand details, Nelson makes the case that the “heart of the deal” is critical and describes how he focused on this during his time in the Senate. As seen through the eyes of a centrist senator from the Great Plains, Nelson shows how and why the spirit of bipartisanship declined and offers solutions that can restore the Senate to one of the world’s most important legislative bodies.

Ben Nelson is a politician, businessman, and lawyer who served as the thirty-seventh governor of Nebraska from 1991 to 1999 and as a United States senator from Nebraska from 2001 to 2013.

"Mr. Nelson . . . has become discouraged by what he sees. His coming memoir is titled Death of the Senate, and although Mr. Nelson concedes that the institution still has a pulse, he sees it as gasping for breath even as Mr. Biden and some current centrist members struggle to produce a semblance of bipartisanship."—New York Times

“Ben Nelson is a prankster but this book isn’t intended to be one of his jokes. He’s dead right. The Senate as a widely admired deliberative body is in danger of becoming a smaller version of the fractious, divided House. With humor, behind-the-scenes drama, and thoughtful insights about the Senate’s decline, Nelson also includes perceptive comments from a number of our colleagues to offer a way forward—so we all can save the Senate!”—Claire McCaskill, former U.S. senator (Missouri)

“Ben Nelson’s book has never been more timely or necessary. With sharp insight, honesty, and wit he takes readers inside the United States Senate to reveal how this bulwark of our democracy worked well not so long ago. Nelson traces its fall into partisan division and rancor and outlines how we all can restore the Senate--through bipartisanship, courtesy, and a willingness to see past each others’ differences, for the benefit of all Americans.”—Harry Reid, former U.S. Senate Democratic leader (Nevada)

“Sen. Ben Nelson was a workmanlike senator; serious, bipartisan, curious, and capable. This book is a reflection of his work on big issues that seem distant but inform our present: the Bush tax cuts, 9/11 and wars in Afghanistan and Iraq, TARP, the Affordable Care Act, and early Senate feuds over judicial appointments—including the one over Brett Kavanaugh. Nelson explains how legislation moves; how relationships are built and how they sometimes shift; how the gears of government grind or mesh—depending on the way they are used or misused. . . . You can hear a straightforward plea for a Senate in which senators can without sanction move between both parties and forge compromise; a place where movement is valued over stasis; a place where ideology doesn’t ceaselessly triumph over practicality.”—Major Garrett, chief Washington correspondent for CBS News

“Ben Nelson paints a clear picture of the way things in American politics ought to be, but this book equally reveals what the political reality is today. Nelson then mixes in messages of hope to remind us about what politics can be, but he leaves it to us to determine what American politics will be in the future.”—Mark Pryor, former U.S. senator (Arkansas)

“Senator Ben Nelson offers compelling insights about his time as a conscientious public servant—as he covers historical events and issues such as 9/11, the Affordable Care Act, Supreme Court appointments, dealings with U.S. presidents, and more. Politics was his way of life and the book reads as a folksy narrative by a senator in the know. Democratic U.S. senators from Nebraska have been rare. It is noteworthy throughout the book how Senator Nelson could navigate through the Republican voters and prevail as a governor and a senator. I am not sure when another Ben Nelson Democrat will emerge.”—Peter J. Longo, author of Great Plains Politics

"Nelson gives you an inside, behind the scenes look at how the U.S. Senate works—when it works. He also has a series of prescriptions on how to break the gridlock."—Dennis Crawford, dennispcrawford.medium.com

"With humor, insight, and firsthand details, Nelson makes the case that the 'heart of the deal' is critical and describes how this was a focus for him during his Senate tenure. He illustrates how and why the bipartisan spirit in the Senate faded away in the Senate, and offers solutions that can restore its vaunted status."—Jason Schott, Brooklyn Digest