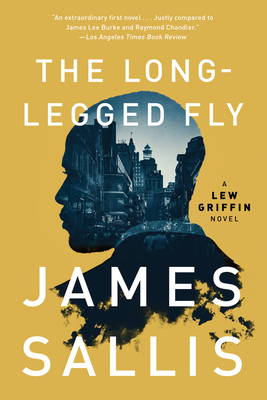 This is book number 1 in the A Lew Griffin Novel series.

As much a classic detective story as it is a literary masterpiece, The Long-Legged Fly introduces us to Lew Griffin: tough, smart, and living in a corner of society where life is fought for as much as it is lived.

In steamy New Orleans, black private detective Lew Griffin has taken on a seemingly hopeless missing-person case. The trail takes him through the underbelly of the French Quarter with its bar girls, pimps, and tourist attractions. As his search leads to one violent dead end and then another, Griffin is confronted by the realization that his own life has come to resemble those of the people he is attempting to find.

James Sallis has published eighteen novels, including Drive, which was made into a now-iconic film; Sarah Jane; and the six-volume Lew Griffin series. He is a recipient of the Hammett Prize for literary excellence in crime fiction, the Grand Prix de Littérature Policière, the Deutsche Krimipreis, and the Brigada 21 in Spain, as well as Bouchercon’s Lifetime Achievement Award. His biography of Chester Himes was a New York Times Notable Book of the Year, and he has been shortlisted for the Anthony, Nebula, Edgar, Shamus, and Gold Dagger Awards.

Praise for The Long-Legged Fly

“Through poetically spare phrases and emotionally evocative dialog, James Sallis inspires both boundless beauty and slow-burn, unimaginable terror—at times simultaneously. In The Long-Legged Fly, Sallis skillfully, patiently, brilliantly peels back the skin, muscle, and bone of each character, exposing both their highest promise and most consuming evil. This is an exciting book; far more than a crime fiction. It is an ingenious, visceral expose of the dark poetry that, thread by ebony thread, is woven into the fabric of each of us. This is the extraordinary and expansive talent of James Sallis.”
—Stephen Mack Jones, author of the August Snow series

“Sallis has created in Lew Griffin one of the great literary characters and written what may very well be the last great detective novel.”
—Spinetingler Magazine

“One of the most inventive and affecting sagas in recent crime fiction. Lew Griffin is an African-American private detective in New Orleans (and a poet and teacher) who specializes in finding missing persons. Griffin’s moral intelligence and questioning mind fold a noir perspective into post-existential angst. And of course there’s New Orleans, full of dangerous mirage.”
—Tom Nolan, The Wall Street Journal

“Beautifully captures the struggle between despair and hope within Griffin’s soul, and the piquant savor of a curiosity that—like New Orleans itself—refuses to die.”
—The Seattle Times

“Sallis is a sure hand—characters and prose, of course, dialogue, too, but he is also a subtle weaver of plot, with the perfect level of push. His descriptions evoke a place that seems to fully exist just around the corner, and his people speak and sweat and live and die and it's all a great pleasure.”
—Daniel Woodrell, author of Winter’s Bone

“James Sallis—he’s right up there, one of the best of the best . . . Sallis, also a poet, is capable of smart phrasing and moments of elegiac energy.”
—Ian Rankin, for The Guardian

“Unlike those pretenders who play in dark alleys and think they’re tough, James Sallis writes from an authentic noir sensibility, a state of mind that hovers between amoral indifference and profound existential despair.”
—The New York Times

“Classic American crime of the highest order.”
–Time Out

“[A] master of America noir . . . Sallis creates vivid images in very few words and his taut, pared down prose is distinctive and powerful.”
—Sunday Telegraph

“James Sallis is without doubt the most underrated novelist currently working in America.”
—Catholic Herald