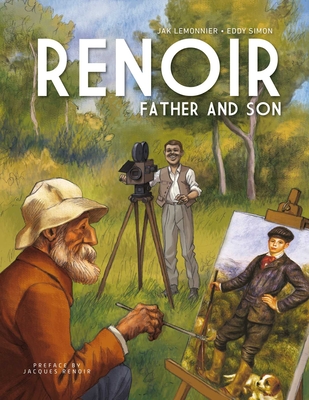 By Eddy Simon, Jak Lemonnier (Illustrator), Jacques Renoir (Preface by)
Email or call for price
Out of Print

Through the captivating pages of this new graphic novel, discover the intertwined destinies of a father and son in search of truth through art.

Art is a family matter for the Renoirs. The path is carved by Pierre-Auguste, the painter who along with Monet, Cézanne, Degas was at the origin of the impressionist movement and continues with Jean, the poetic avant-garde filmmaker. Indisputably one of the masters of French painting of the 19th century, Pierre-Auguste fathered one of the greatest cineastes of the twentieth century in Jean Renoir. From the father’s paintings to the son’s films, the artist affiliation reveals a similar pursuit, and a single source of inspiration: an ode to freedom finding its origins in a profound humanity and love of reality.

Pierre-Auguste and Jean Renoir, father and son, each marked the history of art—through painting for Pierre-Auguste and film for Jean, with the common thread of a desire to transcribe reality. This graphic novel tells the story of the intertwined lives of these two creators who always sought to draw their inspiration from the “spectacle of life”. But behind their art, there is also the story of the filiation between an old man who is slowly losing his strength and a young man seeking to make his own mark.

In fact, it is not until after his father’s death that Jean began his career as a filmmaker and contributed some of the greatest films to the history of the movies: The Grand Illusion, The River, and The Rules of the Game. In 1975 he received an Academy Award for lifetime achievement for his body of his work.

Eddy Simon is a journalist and script writer for cartoons. Born in 1968 in Le Havre, France, he now lives in Pondichéry. He is the author of a biography of Eiffel, the king of steel, among other books.

Jak Lemonnier graduated from the École des Beaux Arts in Le Havre, France. After a few stints in publishing, he has written for several anthologies and animated a number of books and television series.

"In judiciously written and compelling text and vibrant images suited to each man's conflictful world, Simon and Lemonnier sensitively and dynamically capture the risks and triumphs of each daring artist and the power of their innovative, life-affirming, indelible creations."
— Booklist

"Renoir: Father and Son is a lushly illustrated double biography that tells the story of the famous French painter and his famous film-director son. It’s a gorgeous book to look at. It transported me to another place and time with its soft, dreamy hues."
— The London Free Press

"Renoir: Father and Son is no comic book of yore. This is a kinder and gentler take on the graphic novel. Jak Lemonnier has created a stellar work of art in a format that old man Renoir and his son would have approved of."
— Bonjour Paris

"Renoir: Father and Son is a stylistic departure from [Lemonnier's] other work – taking on a more detailed, almost painterly style in deference to its two subjects."
— The Beat