Predator: A Memoir, a Movie, an Obsession (Paperback) 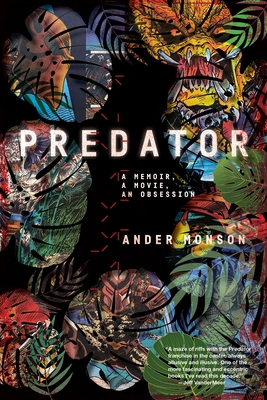 This book is truly one-of-a-kind, an engrossing hybrid of memoir and cultural commentary. Predator's not just for fans of the classic 1987 action film, but anyone who's ever been obsessed with a singular facet of culture—a movie or a song or a story. So if you can look back on your childhood and point to one film that really changed the way you see the world, give Ander Monson's memoir a shot.

A searching memoir of a life lived in the flicker of an action film, by the author of I Will Take the Answer

In his first memoir, Ander Monson guides readers through a scene-by-scene exploration of the 1987 film Predator, which he has watched 146 times. Some fighters might not have time to bleed, but Monson has the patience to consider their adventure, one frame at a time. He turns his obsession into a lens through which he poignantly examines his own life, formed by mainstream, white, male American culture. Between scenes, Monson delves deeply into his adolescence in Michigan’s Upper Peninsula and Riyadh, his role as a father and the loss of his own mother, and his friendships with men bound by the troubled camaraderie depicted in action and sci-fi blockbusters. Along with excursions into the conflicted pleasures of cosplay and first-person shooters, he imagines himself beside the poet and memoirist Paul Monette, who wrote the novelization of the movie while his partner was dying of AIDS.


A sincere and playful book that lovingly dissects the film, Predator also offers questions and critiques of masculinity, fandom, and their interrelation with acts of mass violence. In a stirring reversal, one chapter exposes Monson through the Predator’s heat-seeking vision, asking him, “What do you know about the workings of the hidden world?” As Monson brings us into the brilliant depths of the film and its universe, the hunt begins.

Ander Monson is the author of eight previous books, including I Will Take the Answer and Vanishing Point: Not a Memoir, a finalist for the National Book Critics Circle Award. He edits DIAGRAM and teaches at the University of Arizona.

“Fair warning for 2023: If I run into you and I know you like movies, I'm going to ask you if you've read this brilliant book.”—Erin Keane, Salon's “Favorite Books of 2022”

“The novelist and critic weaves together scene-by-scene commentary on the 1987 sci-fi horror film ‘Predator’ with personal recollections and musings as he contemplates masculinity, fandom and their relationship to violence.”—The New York Times Book Review

“Written in loose-jointed yet elegant prose that guiltily savors Predator’s pleasures, Monson’s subtle, twisty appreciations and critiques . . . transform the movie into a penetrating commentary on the contradictions of manhood. Movie buffs will want to snap this up.”—Publishers Weekly

[Predator is] unlike anything I've ever read.”—Wyatt Mason, Harper's

“In a country where incomprehensible, violent tragedies are becoming commonplace, Monson finds clarity processing the new American way against the backdrop of his favorite movie. . . . Monson finds a cracking pace that imbues [Predator] with an improbable resonance, at once lowbrow and mesmerizingly cogent. . . . An unlikely treatise on manhood with the charm of a late-night movie marathon.”—Kirkus Reviews

“A vibrant piece of social criticism that seeks to connect the dots between autobiography and something larger: the way an artifact or a piece of art can get inside us, shaping not only personality but also perspective, a way of thinking about and moving through the world. In pretty much every way that matters, it’s an effort that succeeds.”—David Ulin, Alta Journal

“I haven’t seen Predator or any other action movie, for that matter—am I a man?—but this is my favorite book of Ander Monson’s. It’s the most sustained, the most lucid, the most serious (the funniest), the most complicit, the most heartbreaking/discomfiting, the most ‘relevant’ to our ‘moment.’ Quite simply, a great book.”—David Shields

“A maze of riffs with the Predator franchise in the center, always allusive and illusive. One of the more fascinating and eccentric books I’ve read this decade.”—Jeff VanderMeer