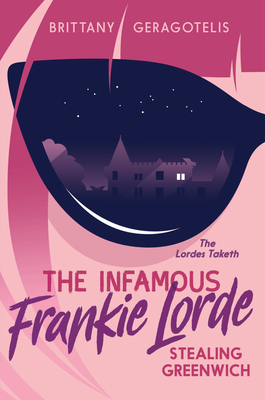 When a professional thief finds out the local real estate tycoon is a slum lord, she decides to give Karma a little nudge. Did I mention she’s in middle school in Greenwich, CT? As fun as the Pink Panther, I look forward to Frankie’s next heist!

A pre-teen international thief turns over a new leaf (sort of) to right societal wrongs in her snooty new town in this upper middle grade series starter for fans of Ally Carter's Gallagher Girls and Heist Society, Stuart Gibb's Spy School, and Ocean's 8.

Being the protégé (and daughter) of the man responsible for some of the world's biggest heists has given Frankie Lorde a unique perspective. And a special set of skills. She can spot an FBI agent in a second, pick a lock in two, and steal a Bugatti in three. (Even if she's technically too young to drive it.) Frankie and her dad are a team, and their jobs are the stuff of international awe.

And then Dad is arrested.

Sent to live with her uncle, who she barely knows and who is, ironically, a cop, Frankie is forced to navigate an entirely foreign world: suburbia. She has to go to middle school, learn what kids her age wear and eat and do for fun--and, alas, it doesn't involve lifting expensive watches.

But life in Greenwich, Connecticut, one of the richest towns in America, also opens her eyes to a startling reality, and seeing the stark contrast of the super-rich and the super-not-rich who support the community living side-by-side gives Frankie an idea. What if she were to put her less-than-legal know-how to good use, turning the tables and evening the score . . . ?

Fresh, fun, and timely, Stealing Greenwich introduces a smart, slick young criminal mastermind with a heart of gold who is sure to become a darling for middle grade set.

Brittany Geragotelis, a former Olympic-bound gymnast and magazine editor, is a self-professed pop culture junkie turned author. Her paranormal action book Life's a Witch received 18 million reads on the writing site Wattpad.com. What the Spell is the first published book in the series, followed by Life's a Witch and The Witch Is Back. Brittany lives in Los Angeles with her awesome husband, two clever boys, one scaredy cat, and a crazy dog.

"The characters are charming enough to capture the interest of readers who will want to go on further Ocean’s 8–esque crime sprees with the team."—School Library Journal