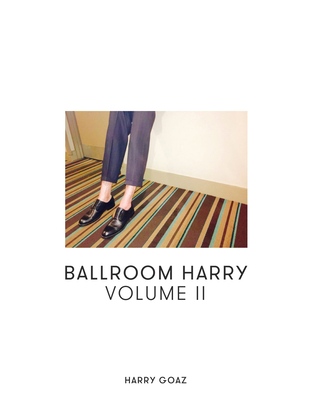 BALLROOM HARRY: Volume II picks up the trail of actor-artist Harry Goaz as he's reprised his infamous role on David Lynch's Twin Peaks. Harry Goaz has been an avid photographer since he was in his teens, and he shares his work in book form for the first time in this collection of photography. This collection pulls from his more recent travels as he returns to Los Angeles, visiting with a keen eye, like seeing long lost old friend. The Ironic juxtaposition of the subtitles under the images peel away another layer of his persona while deftly avoiding direct explanation. This is his second collaboration with creative production group Talented Friends.

Harry Goaz began his artistic career as a casual observer growing up in Texas and Oklahoma. His graceful nature allowed him access to some of the most exclusive enclaves of society, in which he developed his fine sense for the ironic. This skillset served him well when he picked up a camera and began photographing the world around him. Ultimately, he outgrew the rice fields of Texas and found his way to Los Angeles where a chance meeting and his graceful nature landed him the role he is so well known for on the television series Twin Peaks. This iconic role was followed by Twin Peaks: Fire Walk with Me, and another on Eerie Indiana before Goaz stepped back into the world of the camera where he feels most at home. In a time when the pursuit of fame is ubiquitous within every level of society, anyone acquiring notoriety and hedging at exploiting it is downright revolutionary. When in 2015 word came that he would reprise his role for Lynch on Twin Peaks: The Return, the journey carried multiple meanings for Goaz. Prior to reuniting with Lynch, Goaz had shunned the limelight for years, pursuing his art. It was at this juncture that he connected with Director Jason Reimer, who was originally asked to "make something" with Goaz in conjunction with an article about his life between TV stints. The result was the short film Figurehead, depicting Goaz as a frustrated artist waiting in a broken-down home for a phone call that will change his fate. The film has since been added to Twin Peaks lore for his signature portrayal. After this collaboration, Reimer and Goaz planned further collaborations; the first result of which is this collection of photographs entitled Ballroom Harry: Volume II.