Game of Thrones: The Costumes, the official book from Season 1 to Season 8 (Hardcover) 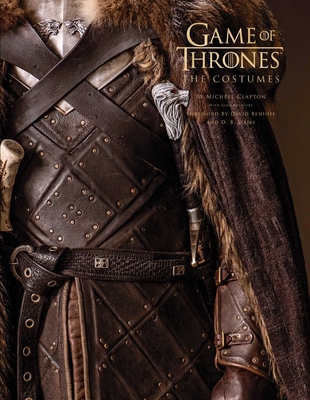 Discover the secrets behind creating the costumes for HBO’s Game of Thrones in this definitive guide.

The official guide to the complete costumes of HBO’s landmark television series Game of Thrones. Discover how BAFTA and Emmy Award-winning costume designer Michele Clapton dressed the heroes and villains of Westeros and beyond, including Daenerys Targaryen, Cersei Lannister, Jon Snow, and Arya Stark.

One of 4 comprehensive and officially licensed Game of Thrones retrospective books from Insight Editions.

• CRITICALLY ACCLAIMED - “...peruse the best of the robes, gowns, coats, and suits of armor that made up the rich fabric of Westeros in Game of Thrones: The Costumes.”—Vanity Fair
• LEARN HOW COSTUMES DEFINED CHARACTERS - 440 pages of in-depth interviews and commentary on how costume design helped convey the evolution of George RR Martin’s beloved characters such as Tyrion Lannister, Sansa Stark, and Brienne of Tarth.
• SEE EXCLUSIVE IMAGES AND DESIGNS - Over 1,000 exclusive and rarely seen images including Michelle Clapton’s designs and original concept sketches.
• HEAR FROM THE SHOW’S CREATORS - Features an exclusive foreword from Game of Thrones showrunners David Benioff and D. B. Weiss.
• AN EYECATCHING COFFEE TABLE BOOK - Deluxe 9.75 × 13 inch format.
• A PERFECT GIFT FOR GAME OF THRONES FANS - Perfectly timed for the holiday season, this gift will be cherished for a lifetime.

Michele Clapton is an award-winning costume designer who has worked in film and television for twenty years. She has received considerable acclaim for her work on Game of Thrones, winning five Emmy Awards, a BAFTA, and four Costume Designers Guild Awards. Clapton also created costumes for The Crown, for which she won an Emmy Award, a BAFTA, and a Costume Designers Guild Award. Her other television credits include Sense and Sensibility, Casanova, and The Devil’s Whore, for which she won a BAFTA. Her film work includes Queen of the Desert, Ali and Nino, Mamma Mia! Here We Go Again, The Secret Garden, and Kingsman: The Great Game. She was awarded the NYWIFT Designing Women Award in 2019.

Gina McIntyre is the New York Times best-selling author of Stranger Things: Worlds Turned Upside Down. Other award-winning books include Guillermo del Toro's The Shape of Water: Creating a Fairy Tale for Troubled Times, Star Wars Icons: Han Solo, Game of Thrones: The Costumes and more. A longtime entertainment journalist, her work has appeared in the Los Angeles Times, Entertainment Weekly and The Hollywood Reporter.

"When it’s all said and done and we close the book on Game of Thrones, you’ll have a chance to peruse the best of the robes, gowns, coats, and suits of armor that made up the rich fabric of Westeros in Game of Thrones: The Costumes."
— Vanity Fair

“Game of Thrones: The Costumes offers up much more than just images of gorgeous outfits. It shares the stories, work, and ideas that went into their creation.”
— Nerdist

“Game of Thrones’ singular attention to detail is painstakingly and lavishly chronicled in this trio of stunning coffee-table books from Insight Editions covering all eight seasons and focusing on, respectively, the museum-quality production art and designs from sketch to screen; still photos capturing the show’s most iconic and cinematic scenes along with intimate never-seen off-screen moments; and an in-depth look at the creation of the epic costumes across Westeros, from the sun-drenched denizens of Dorne to the Wildlings beyond the Wall.”
— Yahoo