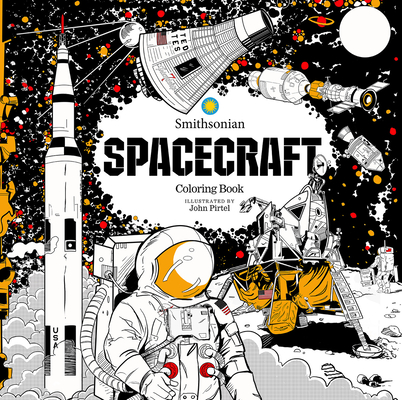 Launch into a universe of creativity -- ready for you to color! The Smithsonian's National Air and Space Museum presents a galaxy-spanning new coloring book that provides a crisp, informative look at the history of space exploration.

With this expertly crafted coloring book, fire your imagination as you marvel at the wonders of interplanetary travel, interstellar exploration, plus the human ingenuity that made it possible, with a selection of the most celebrated artifacts and spacecraft from the National Air and Space Museum collection.

Curated by museum experts and masterfully illustrated by John Pirtel (Airplanes: A Smithsonian Coloring Book), get an up-close look at Sputnik, Explorer 1, Friendship 7, Space Shuttle Discovery, Voyager, astronaut Sally Ride's flight suit, a real Mars rover, the Apollo 11 capsule Columbia, and much more. These detailed pen and ink illustrations encourage you to consider the vastness of space and the achievements necessary to make these giant leaps for humankind, which fans of spacecraft, coloring books, and space history can unlock with their own creativity.

Each page of Spacecraft: A Smithsonian Coloring Book not only stands alone as a work of art, but is also accompanied by brief and fascinating insights from the museum's experts about each artifact and its history, ensuring that time spent coloring is also time spent learning.

John Pirtel was born in New Haven, Connecticut and raised on a farm in North Branford where he avoided farm work and took to reading, drawing and watching TV. He wasn't allowed to watch Superman or Batman because once when he was about seven or eight he decided to "fly" off the back of the couch onto the slate floor, so he drew them instead... along with everything, especially the images found on the funny pages of the newspaper. Self-taught, with the exception of high school classes, John attended the prestigious Kubert School where he honed his craft under the watchful eye of some of the industry's greatest. Upon leaving school John spent several years designing toy premiums for cereal companies as well as illustrating comics and images for licensing. Recently, John took some time to do some classroom teaching and develop a not for profit after-school program in the New Haven area (all while keeping up his illustration work). Aside from his Kubert School education, he holds a Bachelor's degree in Youth Development and a Master's Degree in Early Childhood Education. In his spare time, John enjoys genealogy, playing tennis, reading and collecting original comic strip art.

"Each page is accompanied by informative insights from the museum’s experts about each spacecraft. The series’ deluxe ivory paper allows for a variety of artistic media like pen, pencil, or even watercolor. No matter your interests, you’re sure to find something that grabs you." —Borg.com