Wynd Book One: Flight of the Prince (Paperback) 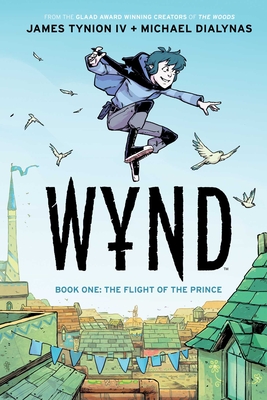 I. Cannot. Wait. For the next installment! Magic, a special destiny, warring mythical beings, and a rogue prince make this the beginning of a great series. I adore Wynd, the emerging superhero, and look forward to seeing him grow into his wings.

The team of award-winning superstars James Tynion IV and Michael Dialynas present the first graphic novel in the all-new fantasy epic about a boy who must embrace the magic within himself if he wants to save his friends from the shocking dangers that await!

In a world where magical heritage is punishable by death, a young boy named Wynd must hide his true identity – and pointy ears – from everyone in Pipetown, even if it means he’ll never have the normal life he wants. But when his secret is threatened, Wynd is forced to leave his home behind to embark on a dangerous quest that will put him at the heart of a royal conspiracy beyond imagination. Now on the run with the boy of his dreams, his best friend Oakley, and a literal prince, Wynd will have to embrace the magic within himself if he wants to save them from the shocking dangers that await! The team of award-winning superstars James Tynion IV (Something is Killing the Children, Batman) and Michael Dialynas (Teenage Mutant Ninja Turtles) present the first graphic novel in an all-new fantasy epic about the power that lies inside each of us. Collects Wynd #1-5.

James Tynion IV is a comic book writer, best known for his work on the Batman franchise for DC Comics. James' comics career began with co-writing the back-up stories on Scott Snyder and Greg Capullo's character defining run on BATMAN, which would lead to his making his own name on a number of Bat-Centric series. This work would culminate in James serving as the showrunner of two consecutive weekly comic series, BATMAN ETERNAL and BATMAN & ROBIN ETERNAL. Recently, he has become the writer of the massive cross-over project, BATMAN/TEENAGE MUTANT NINJA TURTLES, bringing two of the most successful franchises together for the first time. The first issue was one of the best selling comic issues of 2015.

The Young Adult Science Fiction epic THE WOODS broke all records for original series at the company when it was released in 2014, and has recently been optioned for television by Universal Cable Productions. He has also penned the critical successes MEMETIC, COGNETIC and UFOLOGY for the publisher. James has also recently stepped into the shoes of one of the most iconic anti-heroes in the comics medium with the critically acclaimed relaunch of CONSTANTINE: THE HELLBLAZER with Ming Doyle and Riley Rossmo.