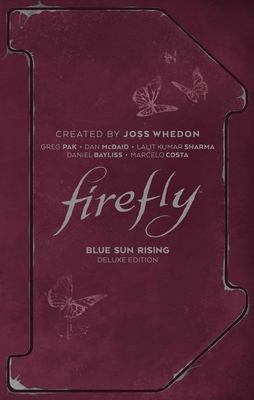 The first-ever comic book event in the world of Joss Whedon’s Firefly is here as Mal must reunite the crew of the Serenity for one last impossible job to save the ‘Verse from the Blue Sun Corporation in a new hardcover collecting the entire story.

THE FIRST-EVER FIREFLY COMIC BOOK EVENT! Sheriff Mal Reynolds has a new partner—a law enforcing robot from the Blue Sun corporation, who doesn't care about motives, about mercy, about anything other than enforcing the law—no matter the cost. The Blue Sun Corporation has helped to run the ‘Verse from the shadows for years, but they’re ready to step into the light and take over. If Mal wants to keep his job and protect his sector, the smart move would be to play by their rulebook. But for Mal, there’s really one choice —reunite the crew of the Serenity for one last impossible job to save everyone they love. Now the ‘Verse is changing in ways no one ever expected - and will lead to the beginning of an all new, all different chapter in the world of Firefly. New York Times best-selling writer Greg Pak (Darth Vader), along with acclaimed artists Dan McDaid, Lalit Kumar Sharma & Daniel Bayliss, launch Mal & the crew of Serenity into their biggest war yet. Collects Firefly Blue Sun Rising #0-1, and Firefly #21-24.