Firefly: Return to Earth That Was Vol. 2 (Hardcover) 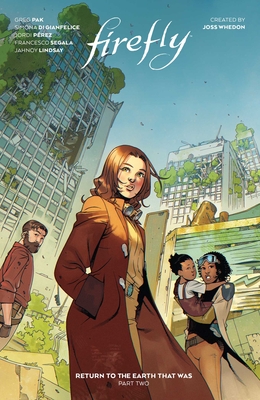 The new characters, new enemies, and a new era of Firefly continues as the crew of the Serenity find themselves stranded on The-Earth-That-Was!

New York Times best-selling writer Greg Pak (Darth Vader) along with artist Simona Di Gianfelice (Power Rangers), Jordi Perez (Queen of Bad Dreams), and Jahnoy Lindsay (Marvel’s Voices) continue the Firefly saga featuring the original crew of the Serenity. In an attempt to evade the Alliance the crew of Serenity find themselves stranded on The-Earth-That-Was, a strange world filled with ancient artifacts, a new civilization and…maybe some semblance of hope. As strangers in a strange land they encounter individual and shared challenges galore! Will Captain Kaylee be able hold her crew together and not strangle Captain Mal in the process? Does Zoë find out what it truly means to be a Washburne? Can the legacy of Shepherd Book unite Lank and Mal and a new world? Collects Firefly #29-32.