Try Not to Be Strange: The Curious History of the Kingdom of Redonda (Paperback) 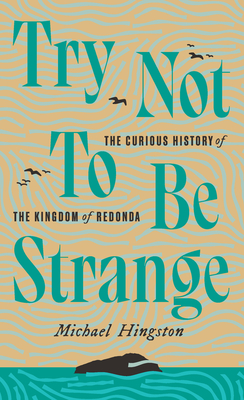 In the Caribbean, the Leeward Islands, between Montserrat and Nevis, is an uninhabited rock - Redonda. In the late 19th century a young man, on his birthday, was taken there by his dad and proclaimed the 'King'.  And that reign has been passed down to a mad variety of his friends, acquaintance, admirers - almost all writers. And they have handed out honorary 'government' positions, ambassadorial designations, and signs of nobility for the 'Kingdom'. This is the story of that succession - it is fantastical, bizarre, delightful, and a glimpse of what we humans can get up to. Not sure how to describe this - set aside the rigors of facts, and enjoy the ride.

On his fifteenth birthday, in the summer of 1880, future science-fiction writer M.P. Shiel sailed with his father and the local bishop from their home in the Caribbean out to the nearby island of Redonda--where, with pomp and circumstance, he was declared the island's king. A few years later, when Shiel set sail for a new life in London, his father gave him some advice: Try not to be strange. It was almost as if the elder Shiel knew what was coming.

Try Not to Be Strange: The Curious History of the Kingdom of Redonda tells, for the first time, the complete history of Redonda's transformation from an uninhabited, guano-encrusted island into a fantastical and international kingdom of writers. With a cast of characters including forgotten sci-fi novelists, alcoholic poets, vegetarian publishers, Nobel Prize frontrunners, and the bartenders who kept them all lubricated while angling for the throne themselves, Michael Hingston details the friendships, feuds, and fantasies that fueled the creation of one of the oddest and most enduring micronations ever dreamt into being. Part literary history, part travelogue, part quest narrative, this cautionary tale about what happens when bibliomania escapes the shelves and stacks is as charming as it is peculiar--and blurs the line between reality and fantasy so thoroughly that it may never be entirely restored.

Michael Hingston is a writer and publisher in Edmonton, Alberta. He is the author of the books Let's Go Exploring and The Dilettantes, as well as the co-author of Harnarayan Singh's memoir One Game at a Time. Hingston's writing has appeared in Wired, National Geographic, The Atlantic, and the Washington Post. He is also one of the co-founders of Hingston & Olsen Publishing, makers of the Short Story Advent Calendar and other literary experiments.