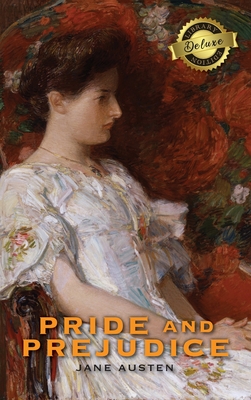 By Jane Austen
Email or call for price.
Usually Ships in 1-5 Days

Set in England in the early 19th century, Pride and Prejudice tells the story of Mr and Mrs Bennet's five unmarried daughters after the rich and eligible Mr Bingley and his status-conscious friend, Mr Darcy, have moved into their neighbourhood. While Bingley takes an immediate liking to the eldest Bennet daughter, Jane, Darcy has difficulty adapting to local society and repeatedly clashes with the second-eldest Bennet daughter, Elizabeth. The story shows how Elizabeth deals with issues of manners, upbringing, morality, education, and marriage in the society of the landed gentry of the British Regency.

Jane Austen is famous for her six novels, Sense and Sensibility, Pride and prejudice, Mansfield Park, Emma, Northanger Abbey, and Persuasion. Her works of romantic fiction, set among the landed gentry, earned her a place as one of the most widely read writers in English literature. Her realism, biting irony and social commentary as well as her acclaimed plots have gained her historical importance among scholars and critics.