The Mystery of the Meanest Teacher: A Johnny Constantine Graphic Novel (Paperback) 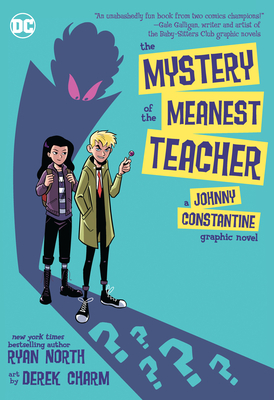 Wise-cracking Kid Constantine, fresh from England, teams up with a demon who speaks in rhymes and a new best friend, Anna, to battle a powerful witch. More character development and plot twists than old style comic books, this hilarious adventure is a noteworthy addition to middle grade graphic novels.

THE MYSTERY OF THE MEANEST TEACHER: A JOHNNY CONSTANTINE GRAPHIC NOVEL is a comedic middle grade graphic novel about two kids with developing magical powers trying to figure out if their schoolteacher is really, secretly, a witch.

After angering a number of hostile spirits in England, 13-year-old magician Johnny Constantine has to find a way out of the country. Persuading his parents to send him to America, John arrives at the Junior Success Boarding School in Salem, Massachusetts. But once there,he finds himself to be something of an outcast. And he is also convinced that his homeroom teacher really has it in for him. Worse, he's convinced that's she's really a witch.

Fortunately, John is able to find one kindred spirit at school with whom he's able to form an alliance--another misfit named Anna, who also happens to have her own developing magical powers. John recruits Anna in his efforts to uncover the truth about Ms. Kayla and expose the Meanest Teacher's real identity to the world.

Joined by a friendly demon named Etrigan, these two amateur sleuths will uncover clues and stumble upon forces beyond their control in a humorous series of misadventures.

Ryan North is the writer responsible for Dinosaur Comics, the Eisner and Harvey award-winning Adventure Time comics, the #1 bestselling anthology series Machine of Death, and the New York Times bestselling and Eisner-Award winning Unbeatable Squirrel Girl series for Marvel. He's adapted Kurt Vonnegut's SLAUGHTERHOUSE-FIVE into a graphic novel, turned Shakespeare into NYT-bestselling choose-your-own-path books, and his book HOW TO INVENT EVERYTHING is nothing less than a complete cheat sheet for civilization. He lives in Toronto.

Derek Charm is an Eisner Award-winning comics artist and illustrator living in New York. He was the artist on the Jughead and Jughead's Time Police comics series for Archie Comics, The Unbeatable Squirrel Girl for Marvel, and Star Wars Adventures for Lucasfilm/IDW Publishing. Outside of comics, he has done illustration and design work for Random House, Marc Jacobs, and DreamWorks Animation.