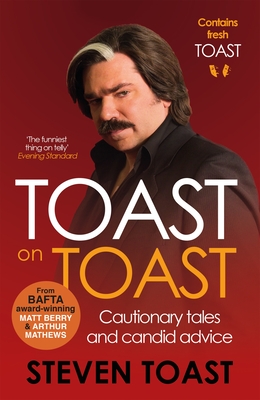 Toast on Toast is the must-have book for all budding actors - and non-actors too. In this part memoir, part 'how to act' manual, Steven Toast draws on his vast and varied experiences, providing the reader with an invaluable insight into his journey from school plays to RADA, and from 'It's a Right Royal Knockout' to the Colony Club.

Along the way, he reveals the secrets of his success. He discloses how to brush up on and expand your technical and vocal skills, how to nail a professional voiceover, and how to deal with difficult work experience staff in a recording studio. He also reveals the dangers of typecasting, describes the often ruthless struggle for 'top billing', and shares many awesome nuggets of advice.

The end result is a book that will inspire and educate anyone who wants to tread the floorboards. It will also inform (and entertain) anybody who simply wants to discover what a jobbing actor's life is actually like.

Matt Berry is a writer, actor, comedian and musician. He co-writes and stars as Steven Toast in Channel 4's cult comedy show Toast of London. He played Douglas Reynholm, the bombastic and sexist boss in The IT Crowd, and Beef in Vic Reeves and Bob Mortimer's House of Fools. He is also known for his appearances in The Mighty Boosh and Garth Marenghi's Darkplace. Berry wrote, starred, and composed all the music in the comedy show Snuff Box on BBC Three with Rich Fulcher. He also co-wrote and performed in a parody rock opera, AD/BC: A Rock Opera, with Richard Ayoade, which also stars Noel Fielding and Julian Barratt.Arthur Mathews is an Irish comedy writer and actor, who is best known for Father Ted, which he co-wrote with Graham Linehan. He has also contributed to The Fast Show, Harry Enfield and Chums, Brass Eye and he has co-written Toast of London with Matt Berry.