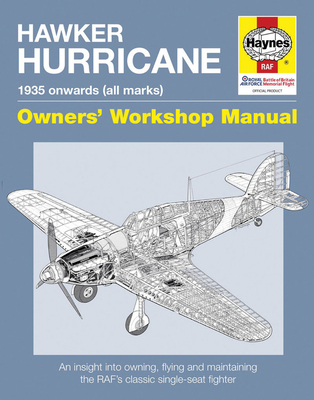 By Paul Blackah, Malcolm Lowe
$23.95
Email or call for price.

During the Battle of Britain the RAF’s Hawker Hurricane fighter won lasting fame alongside the Supermarine Spitfire. Over 11,700 examples were eventually built of this versatile and deadly combat aircraft that fulfilled an incredible number of contrasting roles. Hawker Hurricane Owners' Workshop Manual provides a close-up look at the Hurricane’s construction together with insights into what it takes to own and fly this classic fighter and how engineers keep it airworthy, as well as the historical background of the aircraft’s illustrious Second World War combat history. The RAF Battle of Britain Memorial Flight’s two Hurricane IIc models are the centerpieces of this manual.

Paul Blackah joined the RAF in 1976 and trained as an airframe fitter. In 1993 he was posted to the Battle of Britain Memorial Flight. His specialized knowledge of vintage aircraft is considered crucial to the maintenance of the aircraft in the flight. In the 1990s, Paul was closely involved in the restoration-to-flight of the Messerschmitt Bf109F 'Black 6'. He lives in Lincolnshire, England.

Malcolm Lowe has written for journals and periodicals world-wide on aviation, space-flight, classic cars and ships, and has built a reputation for careful and authoritative research, based where possible on original documentation and photography. He has also written for more than thirty magazines world-wide, and most recently has been an historical contributor to such leading magazines as Aeroplane Monthly in Britain, Flieger Magazin and Aero International in Germany and Popular Mechanics in the US. He is a resident of Dorset, England.