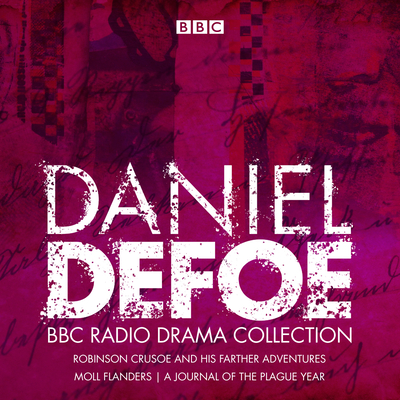 Robinson Crusoe and his Farther Adventures
An imaginative blend of the famous castaway tale and its lesser-known sequel, this thrilling drama sees Crusoe setting sail for the far north. Facing danger in the Siberian wastes, he keeps terror at bay by telling his companions campfire tales of his many adventures on his beloved island. Starring Tim McInnerney as Crusoe.

Moll Flanders
When Daniel Defoe meets Elizabeth Atkins in Newgate jail, she recounts her stranger-than-fiction story of a rags-to-riches life that took her from prostitution to prosperity—but culminated in destitution. Inspired, Defoe mixes fact and fiction to re-invent her as one of his most engaging characters: Moll Flanders. Starring Ben Miles as Defoe and Jessica Hynes as Elizabeth Atkins.

A Journal of the Plague Year
Writing a fictional journal of the Great Plague of 1665, Defoe soon comes to be haunted by the characters he is conjuring. Starring Ben Miles as Defoe.

This exciting new collection of reinvented tales will also include two bonus programs about Daniel Defoe himself:

Defoe: The Facts and Fictions: A documentary by Mark Lawson exploring the far-reaching influence of the pioneering author.

Daniel Defoe was born in London in 1660. He worked briefly as a hosiery merchant, then as an intelligence agent and political writer. His writings resulted in his imprisonment on several occasions, and earned him powerful friends and enemies. During his lifetime Defoe wrote over two hundred and fifty books, pamphlets and journals and traveled widely in both Europe and the British Isles. Among his most famous works are Robinson Crusoe, Moll Flanders, and A Journal of the Plague Year. Though Defoe was nearly 60 before he began writing fiction, his work is so fundamental to the development of the novel that he is often cited as the first true English novelist. He is also regarded as a founding father of modern journalism and one of the earliest travel writers. Daniel Defoe died in April, 1731.